Will Star Wars give Disney’s Infinity toys a much needed boost this holiday season?

Disney (DIS -0.70%) recently launched Infinity 3.0, the third version of its popular collectible figurines which unlock characters in a companion video game. The newest batch includes figures and play sets from Star Wars, Pixar's Inside Out, and the Marvel Universe.

Infinity, which launched in the second half of 2013, helped Disney's Interactive division return to profitability in the fourth quarter of 2013. Earlier this year, Disney claimed that Infinity was the best-selling "toys-to-life" brand of the 2014 holiday season, citing data from research firm NPD Group. It declared that growth helped it claim nearly half of the overall market, which was previously dominated by Activision Blizzard's (ATVI -0.44%) Skylanders.

However, Infinity sales started declining this year. Last quarter, the Interactive division's revenue plunged 22% annually and it merely broke even on the bottom line. Therefore, there's a lot riding on the Infinity 3.0 launch. Will this new set of figures help the Interactive unit post strong holiday numbers, or is the whole "toys-to-life" trend a fading fad?

The business of bringing toys to life
In February, Activision stated that its Skylanders series had generated $3 billion with cumulative sales of 175 million toys since 2011, making it one of the top 20 best-selling video game franchises in history. That momentum didn't slow down afterwards -- by June, 250 million toys were sold.

The beauty of the Skylanders model is that its companion video games couldn't be fully explored without buying the appropriate figurine to unlock new areas. Kotaku previously estimated that at a price of $8 per new figurine, it cost $225 to completely finish Spyro's Adventure, the first Skylanders title.

Disney's Infinity figures come with their own custom playsets based on their movies or cartoons. In the "Play Set" mode, characters from the same franchise can participate together in a campaign mode. In the "Toy Box" mode, players can mix and match characters and items from different franchises. The complete set of the first Infinity characters, along with the game, initially cost more than $250.

The collectible and profitable nature of toy-to-life games has convinced other companies, including Nintendo and Lego, to sell comparable products. As the toys-to-life market grows increasingly crowded, it could become tougher for market leaders like Skylanders and Infinity to gain new customers.

Disney's game plan
Disney launched its Infinity 3.0 products ahead of "Force Friday," a global launch of new merchandise for Star Wars: The Force Awakens on September 4. Disney hopes that sales of these products will accelerate into the film's theatrical release this December.

Disney is clearly counting on the appeal of Star Wars to lift sales of Infinity 3.0 this holiday season, but it could be tough for the business to maintain year-over-year growth. Disney's Interactive division generated $827 million in revenues during the first nine months of fiscal 2015, representing a 12% decline from the previous year. To simply match the $1.3 billion in revenues the division posted in 2014, the unit needs to generate $472 million in fourth quarter revenues -- which would represent 30% growth from the fourth quarter of 2014. That's a tall order to fill, even if The Force Awakens sets new box office records worldwide. 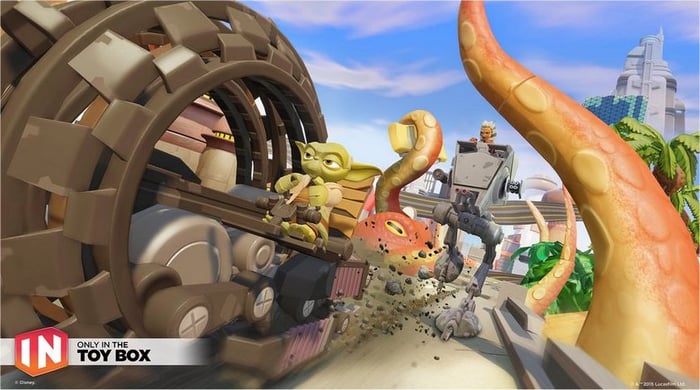 Starting in fiscal 2016, which starts in late September, Disney will combine its Interactive and Consumer Products unit into a single division. This move could obscure Infinity's sales growth by conflating it with toy sales, but it makes sense considering how small the Interactive division is. During the first nine months of 2015, the Consumer Products unit generated four times as much revenue and 13 times as much operating income as the Interactive unit.

Another piece of the puzzle
Infinity represents just a tiny sliver of Disney's business, but its virtual toy box is a great showcase of how the company seamlessly blends its franchises together. Disney excels at maximizing the profit potential of successful franchises by spreading them across its theme parks, movies, TV, and consumer products businesses.

Frozen, for example, spawned new theme park attractions, an upcoming sequel, a TV special and tie-in with Once Upon A Time, various books, and plenty of licensed merchandise. It applies the same strategy to its Marvel and Pixar franchises. Many of Disney's rivals have failed to efficiently expand popular franchises across multiple business units before they burn out.

The future of Infinity certainly won't make or break Disney. However, it's a great way to merge its video game and toy markets while getting customers hooked to the digital versions of its top franchises. Therefore, investors should keep a close eye on the impact of Force Friday and The Force Awakens on Disney's interactive sales during the fourth quarter.