Fifteen robots go at it simultaneously on Tesla's newest vehicle. Is a Model X launch looming?

Electric-car maker Tesla Motors (TSLA 7.43%) has confirmed with The Motley Fool it is now taking orders for Model X. But the online studio isn't live for the public to view yet, as Tesla is only allowing select signature-series buyers to configure their vehicles ahead of its launch. Here are some of the details on Model X (via Bloomberg):

And finally a photo of the production version of Model X: 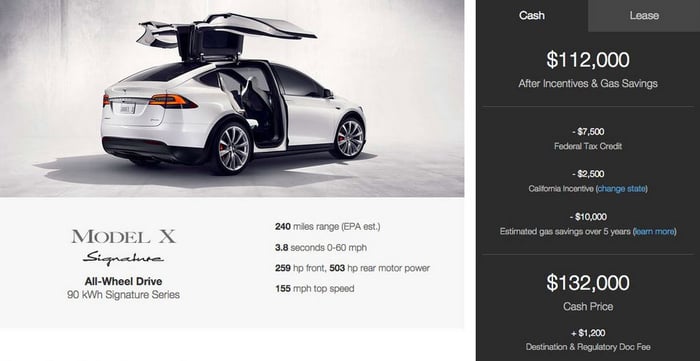 Tesla said during its second-quarter earnings release that it would deliver the first Model X vehicles to customers by the end of September. As the end of the month draws closer, investors are wondering if the company still plans to meet this deadline. But with Tesla already taking orders and CEO Elon Musk sharing a photo of Tesla's "Production Line 2" on Instagram over the weekend, it's looking like the car maker still intends to stay true to the timeline.

Model X production
"Bringing up Tesla Production Line 2," Musk said in the caption on his Instagram photo this weekend. "542 robots in total with 15 operating simultaneously at the central assembly point. And people wonder why I'm worried about the robocalypse...."

The photo of Tesla's "Production Line 2" Elon Musk shared on Instagram over the weekend.

Given Musk's reference to "Tesla Production Line 2," this is presumably a photo of Model X production.

The line's 542 robots ahead of Model X production is worth some emphasis. This compares to about 130-140 robots when Tesla began Model S production. This significant investment in robotic arms for Model X production highlights how large the company's bet is on its next vehicle.

What to expect
If Tesla is going to deliver the first Model X units to customers by the end of September, it will be "a small number," the company said in its second-quarter letter to shareholders.

And, given the backdoor approach it's using to take first orders, it's looking like the number will be small, indeed. Tesla will need to launch its online studio publicly for deliveries more than five weeks out to begin to represent any meaningful volume. And it will undoubtedly take time for production to ramp to significant levels once it does start to get some momentum. It's looking like the earliest Tesla could produce and deliver any significant volume for Model X will be about mid Q4, but probably not until Q1 of next year.

Of course, uncertainty regarding Model X deliveries in the first few quarters shouldn't come as a surprise. Musk warned during the company's second-quarter earnings call that there is significant risk to the Model X production ramp in 2015.

Looking into next year, Tesla is more confident. Management expects to achieve a steady state of production and demand of about 1,600-1,800 combined Model S and Model X vehicles, or about 88,700 vehicles for the full year assuming the company reaches these levels at the beginning of the year. This is up about 69% from Tesla's expected total deliveries in 2015. Management believes this split of demand and production of its Model S and Model X will be about 50/50, possibly leaning more toward Model X.

Look out for either a forthcoming Tesla event to celebrate the first Model X deliveries or the launch of the company's online studio for the SUV in the coming weeks.