Please ensure Javascript is enabled for purposes of website accessibility
Log In Help Join The Motley Fool
Free Article Join Over 1 Million Premium Members And Get More In-Depth Stock Guidance and Research
By Brian Feroldi - Sep 1, 2015 at 11:59AM

An FDA decision date for these two companies is approaching fast -- investors be on your toes!

Investors in small cap-biopharmaceutical companies Opko Health (OPK -7.74%) and TESARO (NASDAQ: TSRO) should start off the month of September with a bang. These two companies are poised to hear back from the FDA about their drug Rolapitant very soon. The drug was initially submitted for regulatory approval in September of last year, and companies were given a review date of this Friday, September 4. If approved, Opko expects to launch the product in the fourth quarter of this year.
Revolutionizing cancer patient care
Rolapitant is an investigational drug that is designed to help reduce nausea and vomiting in patients who are undergoing chemotherapy. The technical name of this side effect is Chemotherapy-Induced Nausea and Vomiting, or CINV. In clinical studies, Rolapitant was shown to be effective in helping patients control their nausea and vomiting symptoms for 5 days, which compares quite favorably to the 1 to 2 days of relief that other currently-available treatments provide.
Rolapitant works by binding to a Neurokinin-1 receptors in the brain, which have been shown to play a role in triggering the feeling of nausea. Rolapitant disrupts these receptors interactions with neurokinin called Substance P, which in clinical results were shown to help patients control their nausea symptoms.
While it may seem like this is a "nice to have" drug rather than a life-saver, CINV is actually quite a serious medical problems that occurs in up to 90% of patients who are receiving chemotherapy. CINV can also lead to very serious problems like dehydration and malnutrition, and can even cause patients to discontinue chemotherapy altogether.
A hot-potato history
During the course of its development, Rolapitant has been passed around between a few different companies -- the drug actually was initially developed by Schering Plough, now a subsidiary of Merck. Opko Health actually acquired the rights to the drug in October 2009, but a year later out-licensed the drug's development and commercialization to its partner TESARO.

An approval would certainly be a big deal for both companies. An approval would mark the first time that TESARO has officially brought a drug to market, and it would trigger some sweet milestone payments for Opko. Opko is currently poised to receive up to $110 million dollars if the drug is successfully approved and commercialized. In addition, if the drug proves to be a hit in the marketplace, then Opko could earn double-digit royalty payments from the product's sales, as well as a share of the profits if the product also makes its way to Japan. Opko also has the right to market the compound in Latin America if it so chooses.

Opportunity ahead
The market opportunity for this drug appears to be huge, as an estimated 6.6 million patients get diagnosed with CINV each year in the U.S. alone, and Opko believes this drug has an addressable market worth $1.25 billion per year. While it's seriously unlikely that the drug would ever capture 100% market share, analyst do seem excited about its potential to grab market share away from Merck's CINV treatment, EMEND, and peak sales estimates are running as high as $850 million.

For TESARO investors, an approval would be a major milestone for the company. Recall that TESARO has yet to bring a single product to market, so this represents a real opportunity to start showing a top-line number on its income statement.

Opko Health, on the other hand, has been pulling in revenue for a while now, but not nearly enough to fully cover its expenses. Through the first six months of the year, the company generated $72 million in revenue and yet still managed to lose more than $159 million, so seeing the company develop another revenue stream and bring in some juicy milestone payments would surely be a welcome development.

Investors certainly have been excited by this drug's potential, and shares in both companies have been bid up over the last few years, placing their returns well ahead of the market average. 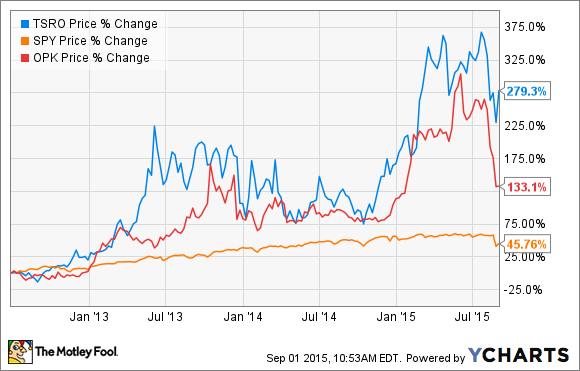 Will Rolapitant receive the regulatory nod this week? Investors will have their answer soon enough.