Please ensure Javascript is enabled for purposes of website accessibility
Log In Help Join The Motley Fool
Free Article Join Over 1 Million Premium Members And Get More In-Depth Stock Guidance and Research
By Bob Ciura - Sep 1, 2015 at 7:45AM

Despite the panic rippling through the energy market, this Fool isn't worried about his investment in Kinder Morgan.

The price of oil continues to collapse in the United States. West Texas Intermediate is down to the low $40-per-barrel range, and some analysts are predicting that oil will soon hit $30. Not surprisingly, energy stocks are selling off.

This pervasive panic has caused energy stocks of all sorts to decline, even those that aren't completely reliant on the price of oil itself. For example, midstream giant Kinder Morgan (KMI -1.45%) is down 33% from its 52-week high, even though its underlying cash flow is holding up well.

But Kinder Morgan investors don't need to lose sleep worrying about what the next direction in oil prices will be. As a shareholder, I'm confident that Kinder Morgan's cash flow will continue to rise regardless of what happens to oil prices. Along with that, I fully expect distributions to keep growing for many years, here's why.

The magic of midstream
Compared with upstream companies that engage in exploration and production activities, midstream operators such as Kinder Morgan own pipelines and storage facilities. Whereas the E&P majors are entirely reliant on a supportive commodity price for cash flow, midstream companies are much more concerned with volumes of the liquids they store and transport.

As such, Kinder Morgan's financial health isn't tied to the price of oil. It operates much more like a toll road, since it collects fees on the volumes going through its pipelines. That results in a steady stream of cash flow, which is then returned to investors through a hefty dividend.

For example, last quarter Kinder Morgan grew distributable cash flow by 56% year over year, to $0.50 per share. Distributable cash flow, or DCF, is a better gauge for the health of midstream pipeline businesses such as Kinder Morgan than traditional earnings per share. DCF is a non-GAAP equivalent to earnings per share that describes how much cash a company is generating, which can then be distributed to investors.

Specifically boosting the company's results was the products pipeline business, which grew earnings before depreciation and amortization 32% year over year. In addition, the terminals unit was up 19% year over year. That was more than enough to offset a decline in the carbon dioxide business. Overall, earnings grew 2% year over year. 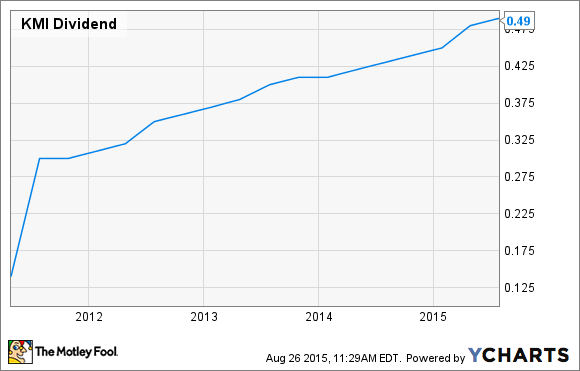 Importantly, Kinder Morgan's DCF fully covered its dividend last quarter. On this basis, there is nothing wrong with Kinder Morgan. In fact, Kinder Morgan reiterated its intention to distribute $2 per share this year, with sufficient cash flow coverage. At its recent $30 closing price, that would represent a huge 6.7% yield.

Even better, Kinder Morgan expects to increase its dividend by 10% per year from 2016 to 2020, so that dividend is only set to rise in the future.

Proven management adds to confidence
Not only am I encouraged by Kinder Morgan's resilient fundamentals, but I'm also confident because management's interests are aligned with those of its shareholders. Richard Kinder, Kinder Morgan's founder and executive chairman, owned 233.8 million shares as of March. That amounts to an investment stake worth in excess of $7 billion.

Since Kinder has so much skin in the game, it's clear he has a lot to lose. As a result, I feel good that management will steer the company in the best interests of all of its shareholders. It's disappointing to see Kinder Morgan's price decline so significantly this year, but I'm not worried at all. As long as distributable cash flow and dividends are each rising, there is no reason to panic about Kinder Morgan.