Please ensure Javascript is enabled for purposes of website accessibility
Log In Help Join The Motley Fool
Free Article Join Over 1 Million Premium Members And Get More In-Depth Stock Guidance and Research
By Daniel Sparks - Sep 2, 2015 at 7:16AM

Competing with Apple is tough. Case in point: Amazon's attempt and subsequent failure at marketing and selling a premium-priced smartphone.

It was June 2014, and all the buzz was about Amazon.com's (AMZN 3.66%) foray into smartphones with its Fire phone. Some media outlets even heralded the device as a challenger to Apple (AAPL 4.08%) and Samsung's industry-leading iPhone and Galaxy smartphones. Many, of course, predicted that Amazon's phone wouldn't budge the two tech giants. 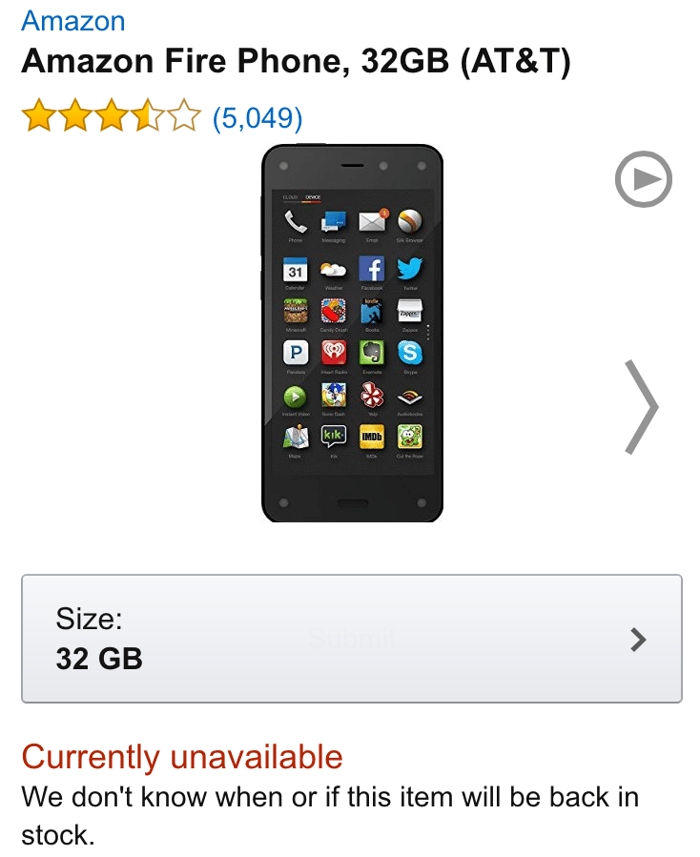 Fast-forward just over a year, and it turns out that not only did Apple and Samsung remain completely unchallenged by the Fire phone, but Amazon has also resigned from any efforts to make any more smartphones. While this product failure certainly makes a great case study for why Amazon should have never made a smartphone in the first place, it also illustrates how hard it is to compete in the iPhone-dominated premium-priced smartphone category.

"I look for economic castles protected by unbreachable 'moats'," Buffett has said.

He continues to emphasize the importance of moats to this day, noting in his 2014 shareholder letter that the variety of businesses owned by Berkshire are "protected by wide moats." He also praised the enduring moat of subsidy Geico for its "enduring" moat in the form of the insurance company's low operating costs.

What is Apple's "moat"? The company has three critical competitive advantages that have been demonstrated consistently since Apple launched the iPod.

Combining all three of these competitive advantages, Apple, with what seems to be an unbreachable moat, is a ruthless competitor at the high end.

With these competitive advantages, it could be argued that given the sheer size of Apple's moat when Amazon launched its Fire phone, the only premium smartphones set to compete with Apple at the time were the ones already established brands already competing with it, i.e. Samsung.

As a side note, virtually every premium alternative to iPhone is struggling to compete with Apple more recently. Year-over-year comparisons in the premium smartphone market are basically only looking favorable for Apple at this point. A note from HTC management in a recent press release sums up the dire state for Apple's competitors at the high end:

Weaker than expected demand at the high end, consistent with Android market, along with weak sales in China, lead to a year on year fall in the second quarter.

As demand for iPhone at the high end in China surges and as increasingly better and cheaper alternatives make inroads in the market, Apple's competitors are losing momentum.

Competing with a giant
The first major sign of Amazon's missteps with the Fire phone was a $170 million inventory charge a few months after it launched Fire phone to uninterested consumers. While a fairly significant number to Amazon, this is like spare change to Apple; these days, Apple is generating about $50.7 billion a year in net income, and most of this is attributable to iPhone. Compare this to Amazon's $188 million loss in the trailing twelve months. Lacking comparably sizable net income and absent virtually any revenue generated from premium-priced hardware, Amazon arguably never had the resources to enter the smartphone market in the first place.

Further, Amazon lacks a respectable ecosystem of integrated hardware, software, and services to drive sufficient interest for a smartphone launch. Amazon's portfolio of native product hardware represents only a fraction of its $96 billion in annual revenue. Conversely, hardware -- particularly the iPhone -- accounts for nearly all of Apple's $224 billion trailing-12-month revenue.

Apple, therefore, dwarfs Amazon's available resources, as well as its existing customer base for natively branded mobile devices. Simply put, competing with Apple and its wide moat isn't an easy task to accomplish, and Amazon is a case in point.

Sure, Amazon probably never intended for its smartphones to seize a sizable portion of market share from Apple. However, if the company wants to sell smartphones at an iPhone price point, it's going to have to offer compelling software, hardware, and service total package, as well as complementary products; and it was clear from day one this was nearly an impossible task for the company. Indeed, this is a testament to how difficult it would be for any newcomer to try to compete with Apple on its own premium-priced turf.