Please ensure Javascript is enabled for purposes of website accessibility
Log In Help Join The Motley Fool
Free Article Join Over 1 Million Premium Members And Get More In-Depth Stock Guidance and Research
By Anders Bylund - Sep 2, 2015 at 9:00AM

Did the telecom services operator start a long-term rise in August, or is it just taking a temporary break from the spring and summer's brutal plunge? 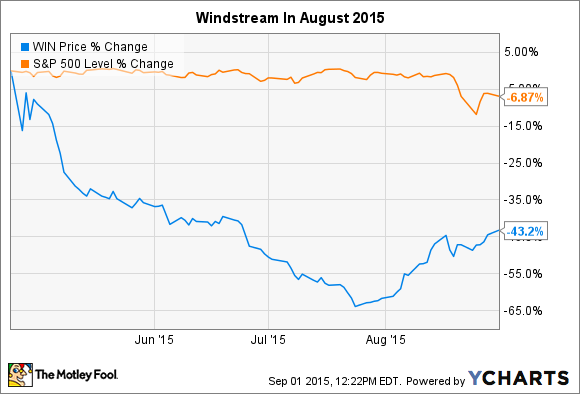 What: Shares of telecom services operator Windstream Holdings (WINMQ) soared 48.2% higher in August, according to data from S&P Capital IQ. The stock is still trading 32% below the levels seen in late April, when the company spun out its infrastructure assets as Communications Sales & Leasing (NASDAQ: CSAL).

So what: After free-falling ever since that game-changing CS&L spinoff, Windstream's shares finally caught a break in August. It started with a strong second-quarter earnings report, where the company met Wall Street's revenue targets and delivered a far smaller net loss than expected. That led to an avalanche of bullish earnings revisions, as five of the six analyst houses following Windstream upped their estimates for the third and fourth quarters.

Now what: Did that solid report put a permanent end to Windstream's sliding share prices? Honestly, it's still too early to tell.

You should note that the stock kept climbing even as the broader market saw a number of significant drops in the second half of August, which adds credibility to the rising trend.

However, investors and analysts are still trying to figure out how this new two-headed beast will work in real life. Windstream blazed a brand-new trail here, since no telecom has ever tried to classify its networking hardware and real estate as a REIT holding company before.

Industry peers have been keeping a close eye on this process ever since Windstream announced it in 2014, hoping that the regional telecom had found a clever way to minimize tax bills, maximize operating flexibility, and lighten a debt-loaded balance sheet. But none of them have officially followed suit yet. They are still waiting for signs of a clear-cut business advantage -- not just a different way of doing business.

The total market value of these two companies stands at $3.8 billion today, down 27% from the $5.2 billion sum seen right after the split. At the end of July, the combined cap stopped at $3.6 billion, so CS&L and Windstream increased their overall value by 6% in August. So far, the CS&L separation has destroyed more shareholder value than it created. Like the telecom industry at large, Windstream investors are still looking for that decisive payoff. August may have fired the starting shot for a long-term rise, but only time will truly tell.