This stock was clobbered by fears about the future of the media industry, in spite of AMC's fantastic second-quarter results. 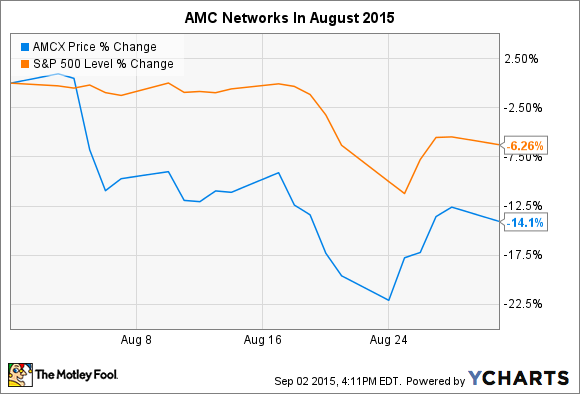 What: Shares of AMC Networks (AMCX -2.50%) fell 14.1% in August, according to data from S&P Capital IQ. Most of that haircut came early in the month, when AMC's second-quarter results easily exceeded analyst expectations.

So what: Analysts were expecting adjusted earnings of roughly $0.88 per share on something like $588 million in top-line revenues. AMC reported far better numbers: Earnings rose 37% year over year to land at $1.23 per diluted share while revenues increased 15% to $601 million.

The report wasn't flawless, of course. International sales decreased by $12 million or 9.4% year over year, breaking a nine-quarter streak of uninterrupted growth. Currency exchange headwinds reduced overseas revenues by $18 million, but the official streak has been snapped.

Now what: In other words, AMC really didn't do anything wrong in the quarter. Instead, investors reacted to bad news elsewhere in the content production industry. Early August is an epicenter of earnings reports from the media sector, and several titans of the trade reported soft results and/or weak guidance as consumers turned off their cable boxes in favor of all-digital video streaming services.

AMC is seeing some of that trend as well, but not enough to start a panic just yet.

"Advertising continues to provide growth for us driven by strong interest, particularly in our original programming," said AMC CEO Josh Sapan in his second-quarter conference call with analysts. Ratings for some of AMC's original shows are declining, but others are holding up very well. Just-launched zombie drama Fear the Walking Dead bowed to record ratings, both in the domestic market and on a global level.

So AMC is fighting off the cord-cutting trend by producing top-shelf content with a mass-market appeal. This approach started long ago with titles such as Mad Men, Breaking Bad, and the original Walking Dead series.

The company's management is very aware of the digital conversion movement, and is actively riding that wave via close relationships with leaders in that space. So a few subscribers are jumping ship, only to enjoy AMC's high-quality shows in alternative channels.

"Nothing has surprised us," Sapan said. "The pressures that are on the system have been fairly obvious for some time. I think we've discussed them. And so, I can just -- I'll leave that comment there."

The August sell-off was based on seemingly appropriate industry issues, but failed to account for the company's unique attitude to the rapidly changing business environment.

With that open approach to digital distribution channels, I'm not surprised to see AMC holding up better than some of its more conservative media peers. So August's 14% share price drop looks like an invitation to pick up AMC shares on the cheap.