A stock's short interest -- defined as the percentage of its shares available for trading that are sold short -- can give us some insight into how big Wall Street money managers are betting on a stock. But while these big-time investors are often right, when it comes to BofI Holding (AX -0.09%) and SolarCity (SCTY.DL), these short-sellers appear to be on the wrong side of the trade.

BofI Holding
With nearly 20% of its stock float sold short, many Wall Street traders appear to think that BofI's shares are headed for a fall. Yet the bear cases for BofI Holding I've seen often come down to one word: valuation.

At nearly 3.4 times book value, I can understand why short-sellers are making the claim that the Internet-banking pioneer's shares are relatively expensive, with dominant global banks like Wells Fargo and JPMorgan Chase currently trading at price-to-book ratios of 1.6 and 1.1, respectively. But while these banking titans have massive scale advantages relative to the far smaller BofI, they have nowhere near its level of growth. During the last five years, JPMorgan and Wells Fargo have grown their earnings at an annualized rate of about 7% and 14%, respectively. During that same period, BofI has delivered annualized EPS growth of more than 28%.

BofI is also significantly more profitable; its return on assets is 1.62% compared to 0.91% for JPMorgan, and 1.41% for Wells Fargo. And BofI's return on equity is also substantially higher, at 18.29% versus JPMorgan's 9.70% and Wells Fargo's 12.58%. What's more, BofI's best-in-class profitability should continue to improve as the bank scales its operations.

And BofI has a long growth runway still ahead. The company has a tiny (by bank standards) $1.7 billion dollar market cap in a trillion-dollar industry in which multiple banks' capitalizations exceed $70 billion:

Yet BofI is rapidly gaining share thanks to its strong deposit and loan growth. Full-year 2014 earnings per share jumped 39.5% on the back of a 46.4% increase in deposits and a 39.5% rise in loan assets. And due to its relatively high interest rates -- BofI paid its depositors 0.75% in its most recent quarter, while big banks like Wells Fargo paid on the order of 0.07% -- I expect BofI to continue to attract deposits at a faster rate than its rivals.

For these reasons, I believe BofI's stock deserves its premium valuation. With its highly profitable Internet-based operations poised to grow rapidly in the years ahead, it's easy to see how BofI's stock could become a multi-bagger, even from today's prices. That would mean handsome profits for BofI's long-term investors, and painful losses for short-sellers.

SolarCity
With more than 40% of its stock float sold short, many Wall Street money managers are betting against Solar City. But shorting SolarCity is, in many ways, a bet against the rise of solar power. And that's a trend I don't want to fight.

According to research firm IHS, the demand for solar energy is expected to rise 30% in 2015. SolarCity has been growing even faster, with a record 44,900 new customer additions and 395 MW of new bookings in its most-recent quarter. The company also installed 189 MW of new capacity, representing a 77% increase from last year.

Yet short-sellers continue to question whether SolarCity's torrid growth can continue in light of increased competition. What they're likely overlooking is that, as the largest solar installer in the country by far, SolarCity posses powerful scale advantages that its competitors will find difficult to match. The company's installation costs are the lowest in the industry, and its integrated model allows it to incessantly drive costs lower as it improve its efficiency. 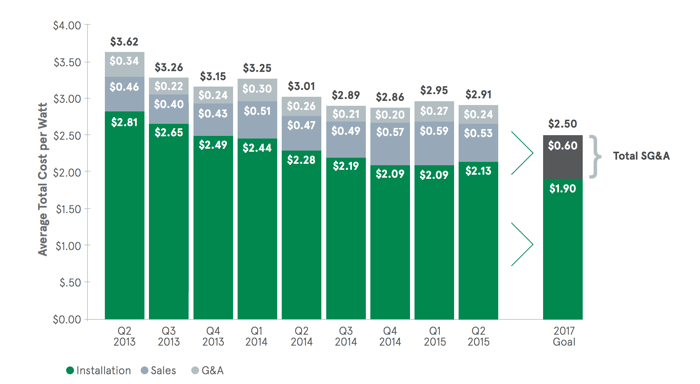 I should also note that investors shorting Solar City's shares are taking the opposing side of the trade relative to company insiders, with CFO Brad Buss and Chairman Elon Musk both buying shares in recent months. While insiders sell their company's stock for many reasons, they typically buy for just one: they think the stock's price is going higher.

It's easy to see why SolarCity's management is so bullish; the company has ambitions to become the largest energy provider in the U.S. during the next decade -- a massive opportunity that dwarfs SolarCity's current $4.6 billion market cap. Should the company meet its ambitious goals -- or just come close -- the value of its stock could grow exponentially in the years ahead. In this regard, even if SolarCity's stock declines in the coming weeks or months, short-sellers may be positioning themselves to pick up pennies in front of an oncoming steamroller.

Why SolarCity, Genesco, and Shoe Carnival Slumped Today
Forget Carbon, Here's 1 Company Bulking Up For an Entirely Different Trend
Where the Money Is: January 22