What: Shares of Diamond Offshore Drilling (OTC:DO) had a wild August as they bounced from gain to loss throughout the month until ultimately ending up 11.7% to close the month.

So what: Before we get too excited about this near-12% jump, we need to keep this in context. For the past two years, its shares have been on a steady decline and ultimately they are still down close to 66% over the past five years. When a company loses that much market value, its stock can bounce pretty wildly from time to time.

The reason that prospects looked ever so slightly brighter for Diamond last month was that it was able to do something that almost no one expected: It posted better-than-expected earnings while at the same time increasing the utilization of its ultra-deepwater and deepwater rigs, the highest price point rigs in the fleet. Considering how much companies in the rig space have struggled to get contracts for their assets, this was a breath of fresh air for the company's stock. 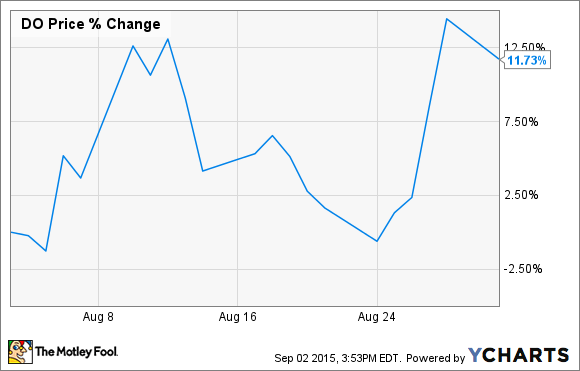 Despite some ups and downs from the broader market -- think China, oil prices, etc. -- it looks as though the company's solid earnings were enough to give its stock a much-needed lift after that long decline we have seen over the past couple of years.

Now what: Of all the things that looked promising in the company's earnings report, the one the really stood out was its ability to lower costs. Diamond has a large fleet of older assets that can require a little bit more TLC than some of its peers, and it has a decent number of those older rigs cold stacked in the harbor. Ultimately, some of these older rigs will get completely scrapped, which will lower costs even further. With one of the stronger balance sheets among offshore drillers and a smaller, more capable fleet of rigs, Diamond looks like it is in a decent position to handle the tough times in today's market.