Please ensure Javascript is enabled for purposes of website accessibility
Log In Help Join The Motley Fool
Free Article Join Over 1 Million Premium Members And Get More In-Depth Stock Guidance and Research
By Anders Bylund - Sep 4, 2015 at 7:26AM 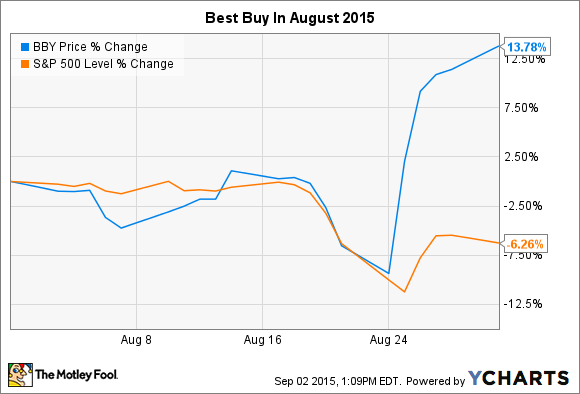 What: Shares of Best Buy (BBY -1.84%) rose 13.8% in August, according to data from S&P Capital IQ. The technology retailer bucked the market's declining trend by posting a strong second-quarter report on Aug. 25, followed by a plethora of analyst upgrades.

So what: For the second quarter, analysts expected Best Buy to post earnings of roughly $0.34 per share on roughly $8.3 billion in top-line sales. Instead, the company presented adjusted earnings of $0.49 per diluted share, culled from revenues of $8.5 billion.

Now what: The quarter's surprisingly healthy sales rested on large-screen TV sets, major appliances, and mobile phones. These are big-ticket items with respectable profit margins, and exactly the right kind of growth segments if you want to drive higher profits. Tablet sales declined, if you're looking for a downside. Then again, the tablet boom has been fading industrywide for several quarters now. That's hardly Best Buy's fault.

As important and successful as Best Buy's online store has been, management still sees its bricks-and-mortar stores as a significant competitive advantage. In particular, Joly likes the way customers might start their purchasing decisions online or even on Best Buy's mobile apps, but then walk into a local store to get a real-world feel for the actual product. There, "the blue shirts" take over:

"Our associates are such a formidable weapon for us," Joly said in an earnings call with analysts. "Even though we've taken $1 billion of cost out, we've actually increased the amount of customer-facing labor. We've increased the product knowledge, the engagements, and the overall sales proficiency." And the in-store sales have responded to Best Buy's focus on experienced, high-quality staff. This company will not go down in cost-cutting flames, the way Circuit City did.