Please ensure Javascript is enabled for purposes of website accessibility
Log In Help Join The Motley Fool
Free Article Join Over 1 Million Premium Members And Get More In-Depth Stock Guidance and Research
By Cindy Johnson - Sep 4, 2015 at 10:22AM

A look at Sierra Wireless' financials says a great deal about whether the turnaround plan is really working.

Continuing our discussion of Sierra Wireless (SWIR 2.61%), this article digs into the financials to determine whether the company's turnaround plan is actually working.

That turnaround plan, specifically, is to focus on riding the massive Internet of Things opportunity via both organic growth and acquisitions. Last year was Sierra Wireless' first full year as a pure play IoT company, so let's look at results from 2015.

A return to growth
Revenue has clearly improved -- growing from from low double-digit levels in 2013 to more than 20% in late 2014 and early 2015 (note that the charts show restated revenue, which excludes revenue from operations that have been discontinued and/or sold). On a less positive note, growth is slowing. It dropped to 17% in the second quarter and analysts are expecting the pace to slow to 11% to 15% for the remainder of 2015 -- falling further to 13% for 2016. Unfortunately, analyst forecasts also tend to be on the optimistic side. 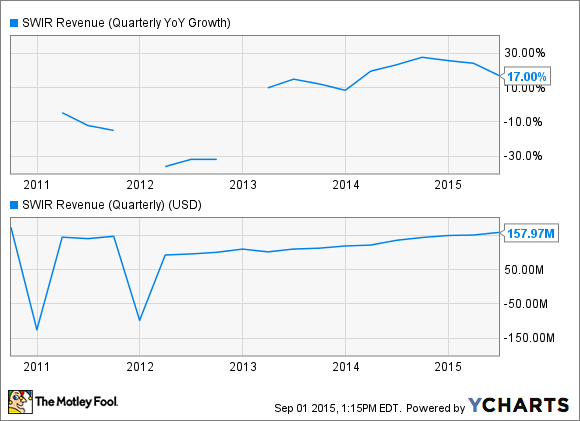 Better margins through cost cutting
Margins have also turned slightly positive, another encouraging note. A 724 basis point increase in operating margin during the second quarter was driven largely by reductions in research and development spending and constrained growth in selling, general, and administrative expenses.

The expense management is not surprising -- cost cutting is a popular page in the turnaround playbook. Even though revenue grew 17% year-over-year during the quarter, SG&A grew only 9%, and R&D fell 10%.

But expense controls can also be a cause for concern for any turnaround. They are especially worrisome for a company that's focused on riding an emerging technology wave. SG&A and R&D expenses as a percentage of revenue have fallen markedly in the past few years, though they are by no means low. Still, you have to wonder if this trend will end up becoming drag on the company's future prospects. That doesn't seem to be happening yet, but there's typically a lag between underinvestment and its negative impact on revenue growth. 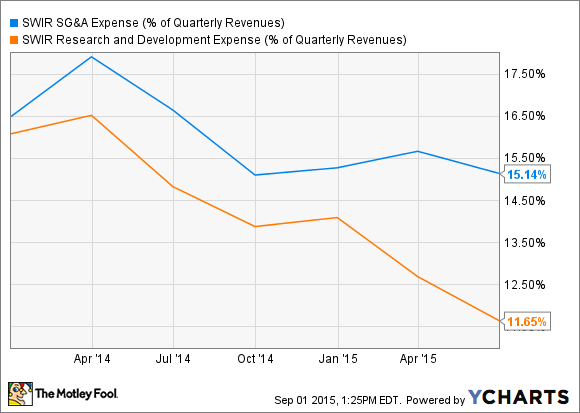 Minding the "GAAP gap"
We've been looking at Sierra Wireless' financials according to generally accepted accounting principles, or GAAP. Like many companies, Sierra Wireless prefers to focus on "non-GAAP" financials. Why?

Many investors choose to focus on non-GAAP earnings as a clearer picture of the company's financial state. For Sierra Wireless, they are much more compelling than the GAAP results:

What is it exactly in the non-GAAP figures that is doubling the bottom line? For Sierra Wireless, the "GAAP gap" includes the impact of stock-based compensation and related taxes; acquisition and disposition costs; acquisition amortization, impairment, integration, and restructuring costs; foreign exchange gains or losses on translation of balance sheet accounts; and certain tax adjustments.

Really? Stock-based compensation -- $3 million for the second quarter -- is still essential compensation for employees. Acquisition amortization -- $2.8 million for the same period  -- is a stealth SG&A expense, a make-versus-buy decision on technology and customers. For companies that grow through acquisitions, those are ongoing costs needed to meet goals. Back out those two items, and operating margin for the quarter falls from 6.8% to 3.1%.

Reality check
When the non-GAAP financials paint such a different picture, check the cash flows. Operating and free cash flow fell precipitously into negative territory during the first quarter of 2015. In the second quarter, they recovered, but operating cash flow growth failed to keep pace with the top line, and free cash flow was unchanged from the year-ago quarter.

Some of the first quarter decline was probably due to normal seasonality. That said, revenue growth at Sierra Wireless hasn't generated meaningful improvement in operating or free cash flow. Importantly, it's free cash flow that funds growth. If a company can't fund growth from those cash flows, it needs to issue stock and bonds or sell underperforming operations to grow. Tapping the market can act as a drag on earnings per share, since there are more shares to split the earnings or rising interest expenses. Moreover, it's unlikely an IoT pure play has operations that it would make sense to sell. 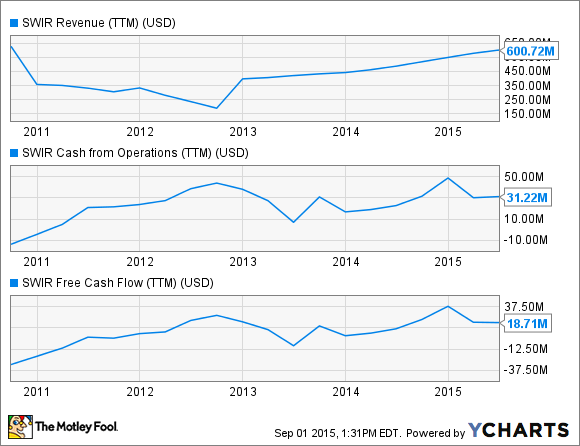 Foolish summary
Double-digit revenue growth is hard to come by these days. Moreover, low margins give Sierra Wireless plenty of room for improvement and huge operating leverage. However, those points should be considered in the broader context of its top line deceleration (just 13% growth forecasted for 2016) and the fact this growth seems heavily dependent on acquisitions, which are inherently risky.

So far, they have done little to improve earnings per share or cash flows, so whether or not the stock is a moneymaker comes down to how it performs versus expectations and its valuation, which I will discuss in my next article.