The markets sank roughly 3% this week while Ambarella, Netflix, and GoPro plunged far deeper. Here's why, and what you could do next.

The stock market just finished another difficult week. The S&P 500 index bobbed and weaved its way to a 3.3% decline between Monday morning and Friday evening, Dow Jones Industrials followed a similar path to a 3.1% drop, and the tech-heavy NASDAQ Composite market barometer fell slightly further in a 3.3% weeklong downward arc.

But some tech stocks were dealt an even tougher hand this week, as their stocks fell 15% or more.

Want to dig deeper into these unfortunate tech stocks? Can any of them roar back to full health? You're sure to find some answers right here: 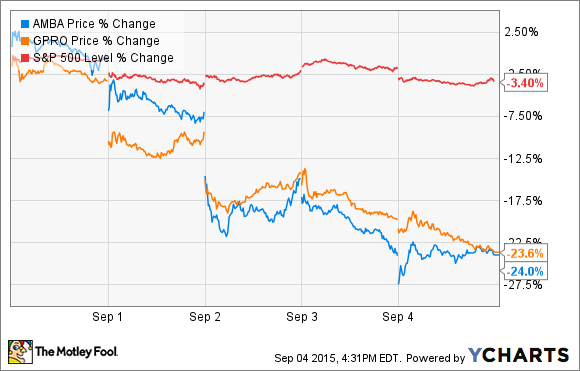 The chip designer reported second-quarter results on Tuesday, easily exceeding Wall Street's estimates for that period. Revenues jumped 79% higher year over year, landing at $84.2 million. Earnings per share rose from $0.37 to $0.88. Analysts would have settled for earnings of $0.80 per share on $81.7 million in sales.

That's a crushing surprise, leaving Wall Street's best guesses far behind. Yet, that report brought both Ambarella and GoPro to their knees.

That's because Ambarella sset lowball sales targets for the third quarter, alongside management comments that point to GoPro not releasing any new camera models for the crucial holiday season. Instead, GoPro got its new product announcements out of the way earlier this year, which helped both companies in the first half of 2015 but might hurt in the back half of the year.

So GoPro appears to rest on its laurels for this holiday period. The HERO4 product line must buckle up for a heavy marketing push at the end of this year, without any of the usual slam-dunk selling points such as new features or improved picture quality.

The cameras announced in the spring included an ultra-lightweight and simplified HERO4 version, as well as two complex camera arrays designed for virtual reality recording. These are extensions of the top-shelf HERO4 lineup that GoPro introduced in September, 2014. Sticking to the same brand identity for a couple of years is nothing new, but GoPro typically prefers to push out some brand new updates in time for the holiday-heavy fall season.

That being said, GoPro CEO Nick Woodman recently gave notice that the release schedule might be different this year. Responding to an analyst query in July's second-quarter earnings call, Woodman laid his cards on the table:

"In the past, we've cautioned anybody about getting too used to any typical cadence for product releases from us," he said. "When we see an opportunity to introduce a product that we believe has a significant new value proposition to consumers, we'll do it. And if that's outside of the typical fourth quarter holiday release schedule -- so be it."

The takeaway from that early warning is that GoPro may adjust its product release timing, even if the end of the digital camera world isn't just around the corner. Maybe the HERO4 family is good enough, and selling quickly enough, to pull GoPro's heavy holiday load without hardware upgrades.

All of this makes perfect sense to me. Seen in the light of Woodman's strategy hint, it's easy to imagine a perfectly healthy holiday season for both GoPro and Ambarella.

We'll know more in mid-October, when GoPro reports its third-quarter results and offers guidance for the end of the year. Until then, I'm tempted to file these 23% drops under "O" for "overreaction," and treat it as a fresh buy-in window for both of these battered stocks. 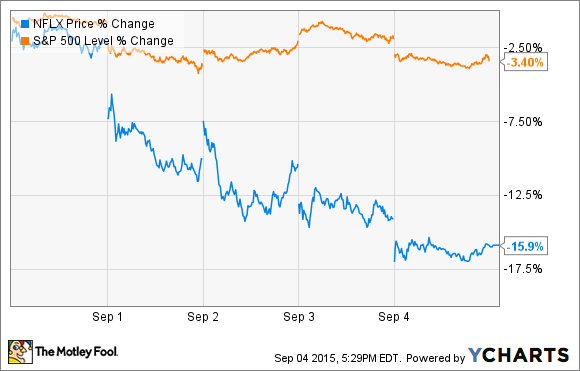 Closing at $98.79 on Friday, the video veteran's shares fell 15.9% this week and now sit a full 23.5% below the all-time highs they recorded in early August.

There are many angles to the Netflix plunge, but none of them seem worthy of a 16% drop.

First, investors everywhere are showing all kinds of nerves regarding slowing growth in China and the usual batch of reports on the American economy. Nobody seems sure of where any of these lines are going, triggering a classic panic reaction: Sell high-priced stocks like Netflix until the markets look safe again.

Second, Netflix investors saw an influx of fresh competition this week. Hulu introduced a brand new streaming video subscription with absolutely no commercials inserted into the video streams. For $12 a month, Hulu customers can now enjoy the same content the $8 plan offers, from Mythbusters and South Park to CSI and Seinfeld, but without the annoying advertising breaks. Moreover, Apple (AAPL -2.46%) is reportedly talking to TV networks and movie studios in preparation for a Netflix-style video subscription service. The iPhone titan is said to have considered making its own films and shows as well, extending the head-to-head comparison with Netflix even further.

Third, Amazon.com (AMZN 0.19%) now allows mobile Prime Video subscribers to download some content for later consumption. This can be handy if you're planning a trip into areas of weak Wi-Fi access and mobile network coverage. This feature is unique to Amazon.

And the hits keep coming: Fourth, Netflix decided not to renew its distribution contract with premium cable network Epix . Hence, many popular movie titles like World War Z and the Hunger Games series will leave Netflix in October. Instead, they will show up on Hulu since that service signed a multiyear, non-exclusive distribution pact.

Taken together, all of these pressures made investors forget about Netflix's expansion into Japan. There's your double-digit drop for the week.

Yikes! Right?
Despite all of these issues hovering on the horizon, am I still not worried about Netflix's business future or investment value. This, too, shall pass.

First, Netflix offers a low-cost service that isn't terribly sensitive to swings in the domestic or global economies. The streaming service actually brings enough quality at a low enough price to pose a serious threat to traditional TV networks -- especially when household belts are pulled a little tighter.

Second, there's no reason why Netflix wouldn't be able to thrive alongside several digital streaming rivals. Netflix is particularly keen on its own original shows and entirely exclusive deals, which means that you can only find that content on Netflix. Others are striking similar poses, dividing the content production market in a healthy way. It's much like the way premium cable networks fight for the best shows, which will then attract dedicated fans. It's just the medium that differs this time.

Third, Netflix CEO Reed Hastings wants no part of video downloads. In a video interview with CNN this week, he shrugged off Amazon's download feature as a short-term solution to a bigger problem. In the long run, Hastings expects that high-speed networks connections will essentially be available everywhere, erasing the need for a clunky download experience that takes some planning ahead..

And fourth, well, that Epix deal has been doomed for years. In fact, I said as much nearly five years ago when the ink had barely dried on Netflix's Epix contract:

"In the long run, Netflix needs to go around the whole man-in-the-middle tier and start striking distribution deals directly with the studios. Early efforts have created bonds to small-time movie houses Relativity Media and Nu Media, but the company won't stop there."

Indeed, Netflix didn't stop there. The company now has exclusive content deals with a handful of major studios, next to its own portfolio of top-shelf productions. So the Epix relationship ended the way it always had to, as Netflix moved on to more intimate studio ties. There's no room for a third wheel anymore.

So no, I'm not at all worried about any of the clouds gathering over Netflix this week. I recently called out Netflix as one of the best stocks to buy in September, especially if share prices fell further for no good reason. That's exactly what happened, and my opinion hasn't changed.