Global jitters caused this blue chip to have a rough month.

What
Global drugstore giant Walgreens Boots Alliance (WBA 0.86%) reversed course during the month of August as its stock fell about 10% during the month, according to data from S&P capital IQ. 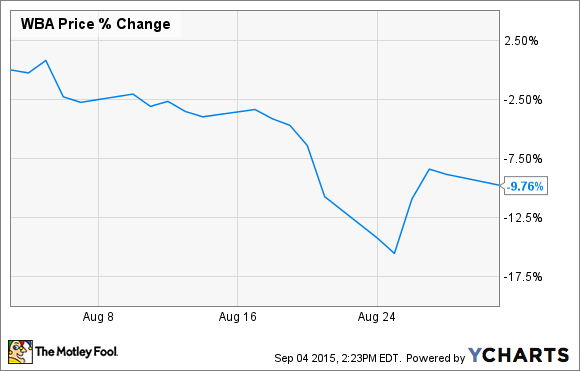 So what
The company formerly known as Walgreens didn't give investors a whole lot of news to warrant its share price decline in August, so it's likely that the stock got caught up in the general global worries that caused markets around the world to tumble during the month.

Although many investors might find it worrisome to watch a huge company like Walgreens fall for no apparent reason, these sorts of short-term dips are just par for the course in the world of investing.

Now what
When the markets deal a blow to a high-quality company like Walgreens, there's generally nothing to fear. Investors who were bullish on Walgreens' prospects four weeks ago shouldn't look at August's share-price movement as a reason to change their tune.

In fact, when you look at the recent quarter that Walgreens just put up, I think there are plenty of reasons to be optimistic. Revenue for the quarter came in at $28.8 billion, up a huge 48% from the year-ago period. However, while that number sounds eye-popping for a company of Walgreens' size, it's important to remember that its mostly due to last year's acquisition of Alliance Boots.

The merger of the two companies appears to be going well, as Walgreens has reported net synergies of $504 million since the start of the fiscal year and reassured investors that it expects to save at least $650 million in total costs for the year.

Walgreens also remains a dividend behemoth: The company just raised its payout by 6.7%, marking the 40th dividend hike in as many years

Taking a deeper dive into the companies financials, same-stores sales growth in the U.S. clocked in at an impressive 6.3%, and adjusted net earnings per share jumped a huge 23% to $1.02. The company also raised its full-year earnings guidance to $3.70 to $3.80 per share, up sharply from its previous prediction of $3.45 to $3.65 a share.

In my opinion, Walgreens remains well positioned for long-term growth as the global population ages and more of our income is spent on staying healthy. Shareholders should also benefit as more cost savings get wrung out of the Alliance Boots acquisition, and the company is certainly committed to growing its small but growing dividend.

After a weak month, the stock now trades for around 22 times trailing earnings. That isn't exactly cheap, but considering how high-quality this business is, I have a hard time calling it expensive. Investors who buy the shares today will probably do just fine over the long term.