The dream of employing vaccines to fight and/or prevent various forms of cancer seemingly came to an abrupt end in 2014. After the slow-moving field got a huge boost in 2010 with the FDA approval of Dendreon's Provenge for metastatic castrate-resistant prostate cancer, this once-promising area of oncology research continued to struggle with poor clinical outcomes, culminating in the high-profile failures of GlaxoSmithKline's MAGE-A3 and Merck KGaA's tecemotide across a host of indications last year. Given the almost complete lack of a therapeutic signal by either of these two closely watched experimental immunotherapies, these two pharma giants shuttered their cancer vaccine development efforts and moved on to other promising lines of cancer research, such as checkpoint inhibitors. 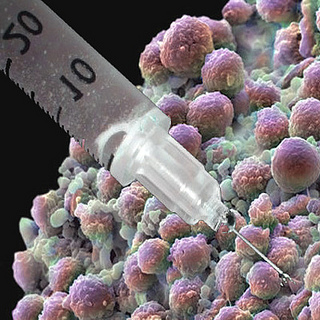 After all, Bristol-Myers Squibb's and Merck's respective PD-1 inhibitors, which prevent a tumor from suppressing an immune attack, are proving to be highly effective therapies in several hard-to-treat forms of cancer. As a result, most Big Pharmas, and even a handful of big biotechs, plunged into checkpoint inhibitor research, hoping to copy their peers' early success. Cancer vaccines, therefore, appeared destined for the dustbin as almost the entire pharma industry focused on checkpoint inhibitors.

Cancer vaccines get a second look
While the big names were looking the other way, some surprisingly cool stuff happened in the field of cancer vaccines. Specifically, smaller biopharmas and biotechs like Agenus, Celldex Therapeutics, and Northwest Biotherapeutics all began reporting some impressive efficacy and safety data for their respective brain-cancer vaccines. At nearly the same time, synthetic DNA-vaccine maker Inovio Pharmaceuticals (NASDAQ:INO) released some encouraging midstage trial data for its lead clinical candidate, VGX-3100, a DNA-based vaccine designed to treat cancer and precancers of the cervix caused by human papillomavirus.

But the pendulum didn't really swing the other way until the rise of checkpoint-inhibitor development helped to further elucidate the complexities of the tumor microenvironment. In a nutshell, we now know that tumor load, type, and stage all interact in complex ways that can blunt the therapeutic effects of any single immunotherapy. Even these powerful PD-1 and PD-L1 inhibitors tend to only work in about a third of patients -- namely, those who express high levels of these proteins.

Where cancer vaccines seem to have the best shot at becoming a major part of the immunotherapy landscape is in patients with an early and less aggressive form of the disease. These types of patients tend to have lower immune responses and tumor burdens, making them ideal candidates for vaccination.

Inovio could be in the catbird seat right now
Inovio, like its cancer-vaccine peers, has struggled to find a way to bring a product to market. Its most advanced clinical candidate, VGX-3100, is finally gearing up to enter a pivotal late-stage study next year, but the vaccine's development has been painfully slow. Part of this meandering clinical effort might be a tacit recognition on the company's part that cancer vaccines, in general, may have little chance of success as monotherapies.

But the tiny biotech's fortunes appear to be changing after it signed a collaboration deal with Britain's AstraZeneca (NYSE: AZN) for its killer T-cell activating immunotherapy, INO-3112 (VGX-3100 plus DNA-based IL-12), as well as two other products yet to be developed. Astra's biotech subsidiary MedImmune plans to combine INO-3112 with its own experimental immunotherapeutic products in a number of human papillomavirus-driven cancers. In my view, this deal shows that Big Pharmas are still intrigued by the prospect of using vaccines as part of a broad immunotherapeutic approach to fighting cancer.

Is Inovio's stock a buy?
Astra has been growing its immunotherapy pipeline at breakneck speed in an effort to stay ahead of would-be competitors like Pfizer and to catch up to market leaders Bristol and Merck. So we will probably learn whether Inovio's experimental vaccine has a role to play in the combo setting sooner, rather than later. In fact, I wouldn't be surprised if the duo presented some of the early-stage data at next year's ASCO meeting. Until then, though, this stock remains a bit too speculative for my taste. As such, I'd recommend holding off for the time being.