New York City is one of the strongest real estate markets in the world, and these three REITs own a substantial piece of the pie.

New York City is home to some of the most incredible real estate on the planet. However, with trophy office towers sporting price tags in the hundreds of millions, or even billions of dollars, it is also one of the most expensive real estate markets in the world.

So, if you're looking for a way in without breaking the bank, you'll want to take a close look at Empire State Realty Trust (ESRT 6.00%), SL Green Realty (SLG 5.43%), and Vornado Realty Trust (VNO 7.09%), which own some of the most enviable portfolios in the real estate investment trust, or REIT, universe.

1. Empire State Realty Trust
This $2 billion company may not be the biggest -- in fact, it only owns 20 properties -- but what it does have is possession of the iconic Empire State Building. 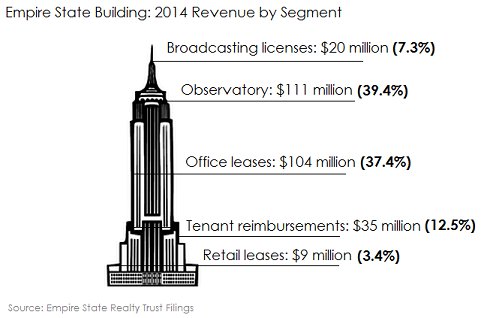 As you can see above, the Empire State Building is essentially four businesses in one. The office tower not only generates rental income from retail and office space, but it also pulls in revenue from broadcasting licenses, and a whopping $111 million in 2014 from ticket prices for visitors to go to the top of the building.

The Empire State Building is the star of the portfolio, but it is not the only irreplaceable asset. The company owns eight other Manhattan properties built before 1930, and future growth will depend on the entire portfolio, because the big opportunity is in redevelopment. Over the next five years, the company plans to redevelop two million square feet of real estate -- which accounts for 20% of its entire portfolio -- in the hopes of enticing higher rental rates, and if the company is able to follow through, this could be one of the top REIT growth stories.

2. SL Green Realty Corp
Unlike the smaller Empire State Realty, which only went public in 2013, the more senior SL Green was formed in 1997 and is the largest office landlord in New York City. The $10.5 billion company owns interest in 120 properties, or 44 million square feet of real estate -- which is roughly the size of 16 Empire State Buildings.

The company generates 71% of its revenue by focusing on Manhattan office space, and among the company's long list of trophy office towers are: 388-390 Greenwich Street, which is an important location for Citigroup; 1515 Broadway, home to MTV studios; and 11 Madison Avenue, which was just recently purchased this past August for a whopping $2.285 billion and is the U.S. headquarters for Sony and Credit Suisse.

SL Green's chief focus may be office properties, but one of the major opportunities for the company is expanding into retail space. Right now, retail properties account for just 10% of revenues, but the company's executives are expecting that number to double over the next few years. SL Green already has access to the market, and with New York City being one of the most densely populated cities and top tourist destinations in the world, diversifying its business into retail should provide plenty of growth opportunities to go along with its already-established office portfolio.

3. Vornado Realty Trust
A little different than the previous two, a portion of this $16 billion company's 44 million square feet of real estate is spread beyond New York City and across several major U.S. real estate markets. However, over the past several years, Vornado has been refocusing on its bread and butter of office and retail space in New York City and, to a somewhat lesser extent, Washington, D.C.

The decision to refocus the portfolio came in typical fashion as Vornado attempted to spread its wings with a series of what we'll call "non-core ventures" that didn't pan out. So, since 2009, Vornado has executed 85 dispositions, as well as a spinoff, that totaled $8.7 billion in divestitures. By the end of 2014, approximately 98% of the company's cash flow was coming from New York and D.C., compared to just 75% in 2009.

Today, Vornado's more New York-centric portfolio is headlined by 1290 Avenue of America, which is home to Wenner Media (owner of Rolling Stone magazine and US Weekly), and nine million square feet of real estate in the area surrounding Madison Square Garden and Penn Station.

Ultimately, Vornado has been bogged down with realigning its portfolio of the past few years, but the company seems to be back on track and should once again be the dominant office and retail player in the New York real estate market -- as it has been for the last 35 years.

New York ain't cheap
The share price of these stocks may not be eye-catching, but New York-focused REITs carry some of the most expensive valuations among REITs. With iconic and irreplaceable assets set in one of the strongest real estate markets in the world, these companies have a competitive advantage most other REITs simply can't touch.

In this case, I think you get what you pay for, and the three companies I mentioned are easily some of the best ways to grab a piece of the New York market.

Why Vornado Stock Was Falling in December

Expect This High-Yield Stock to Cut Its Dividend