According to a leak from BenchLife.info, Advanced Micro Devices (NASDAQ:AMD) will be launching accelerated processing units -- which integrate both the CPU and the graphics core onto a single piece of silicon -- based on its next-generation "Zen" processor architecture during the first half of 2017.

There seems to be a lot of speculation out there as to whether AMD will incorporate the High Bandwidth Memory technology (commonly referred to as HBM) used in its recently released "Fiji" graphics chip into these Zen-based APUs.

I believe that the answer is probably "no" -- here's why.

According to a leaked AMD slide, the company is positioning its first Zen-based APUs, code-named "Raven Ridge," as a "mainstream" processor in 2017. Given that HBM seems to be positioned as a premium memory type aimed at very high-performance processors (such as high-end graphics chips), it doesn't seem likely that including significant amounts of HBM on an APU would be particularly cost effective.

Even the higher-end Summit Ridge chips likely won't have it
Interestingly enough, according to additional leaked slides from BenchLife, AMD's higher-end (and thus more expensive) desktop chip -- code-named "Summit Ridge" -- which the slide indicates is aimed at the "performance segment" for "highly threaded applications," probably won't have this technology.

In fact, according to a prior leak (via KitGuru),  Summit Ridge will feature only dual-channel DDR4 memory. One might suggest that AMD might not need a ton of memory channels, because it will bring HBM onto the package, but the following slide from the company's Financial Analyst Day seems to suggest otherwise: 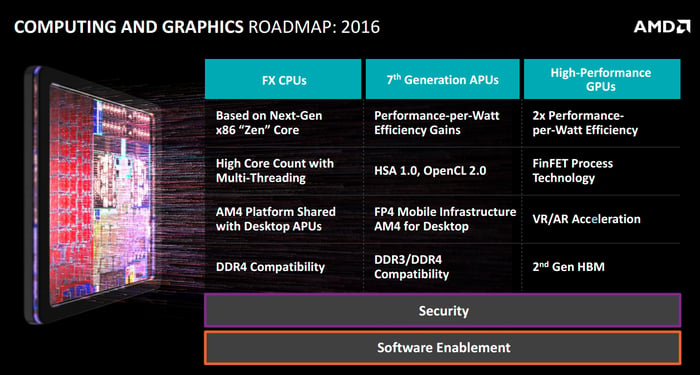 Indeed, notice that AMD explicitly called out the use of HBM for its "high-performance GPUs" but only talked about DDR4 compatibility for its next-generation FX chips.

I would suspect that if AMD were planning to introduce a major new memory technology that could potentially be a competitive advantage, it would have highlighted it at its Financial Analyst Day.

It's pretty clear, then, that client processors from AMD using HBM probably won't hit the market until at least 2018, if not well beyond then.

Where might we see AMD deploy HBM, then?
AMD is obviously deploying HBM on to its highest-end Fiji graphics chip today, and I would expect that over time -- as HBM becomes more cost effective -- AMD to try to bring HBM to stand-alone graphics chips sold at lower price points.

I could also see AMD deploying HBM in other graphics-intensive applications, such as a next-generation game console chip. Such a chip is likely to have significant CPU computing power as well as relatively beefy graphics capabilities (especially since a major console refresh may be several years out), so HBM could be a good fit there.

Finally, AMD talked at its recent Financial Analyst Day about bringing "disruptive memory bandwidth" to its next-generation Opteron server processors. Although I am inclined to think that this may just mean the inclusion of more DDR4 memory channels with support for higher-frequency memory, this might also be a clue that AMD plans to integrate HBM into such processors.