Please ensure Javascript is enabled for purposes of website accessibility
Log In Help Join The Motley Fool
Free Article Join Over 1 Million Premium Members And Get More In-Depth Stock Guidance and Research
By Daniel B. Kline - Sep 7, 2015 at 5:00PM

The new OS replaces its unpopular predecessor and brings back some familiar features.

Windows 10 is not a make-or-break product for Microsoft (MSFT 2.76%), but it may be the company's last chance to remain a dominating player in the operating system market it once owned nearly entirely.

In recent years, Windows has lost its stranglehold on the market. Rival platforms, both mobile and desktop, have cut into Microsoft's overall share of computing devices. It was a harsh lesson for Microsoft. The company had been needed by PC users for most of its existence and now, once consumers had choices, they were willing to leave.

Microsoft compounded the problem by being slow to properly enter the phone and tablet markets. But the biggest mistake the company made was Windows 8 -- an operating system that was either a huge mistake, or (as I believe) slightly ahead of its time.

The OS was created and optimized for touch-based devices, which most PCs weren't. It was a confusing system to use on a traditional laptop or desktop that also featured a number of radical changes -- like dropping the traditional launch screen and Start Menu. This proved to be too much for many users to take, and unlike in previous years, when an unpopular Windows iteration meant customers would just wait for the next one, Win8 sent some people into the arms of Microsoft's rivals.

Following up the failure of Windows 8 with a successful replacement is key to the company stemming the bleeding and shoring up a crucial revenue center. It's still early in the launch cycle, but it looks like the new OS, Windows 10, has gotten off to a very strong start.

The Tweet above comes from Microsoft's Corporate Vice President of Windows and Devices Yusuf Medhi. His data was backed up by August numbers from Net Market Share, which confirms that the new OS has rocketed off to a strong start.

Windows 10 reached a global market share of 5.2% in its first full month on the market, topping the launch performances of Windows 7 and Windows 8, which had claimed 4.1% and 1.1% market share in the first month after their respective releases, Statista reported. That makes sense because Windows 7 was also following an unpopular predecessor (Vista), and Win10 followed the even-more-disliked Windows 8. 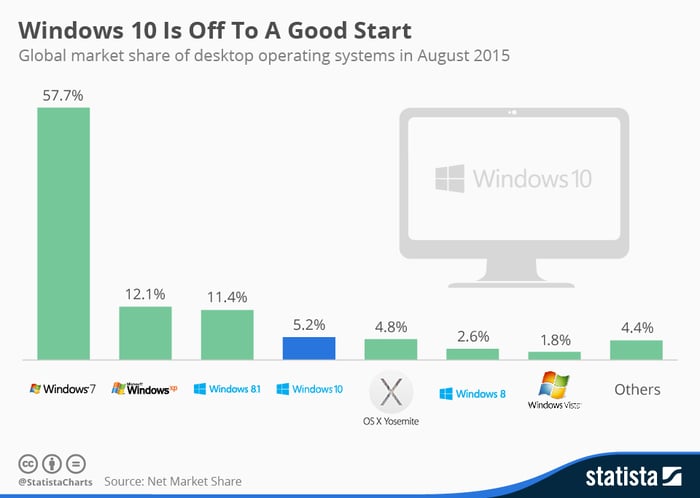 There is pent-up demand
While it's still very early in the game, these numbers are very encouraging for Microsoft. By putting back some popular features and modifying some of things people actually liked about Windows 8, the company has created an OS that's familiar but forward-looking. Clearly, that appealed to both dissatisfied Win8 customers and users who had stayed with Windows 7, Vista, or even the unsupported XP.

The next challenge for Microsoft is whether it can continue to bring people from its earlier versions of the OS into Windows 10. That seems very likely for the people using XP (which is open to being hacked since the company no longer publishes security patches for it) and Win8 because of its unpopularity.

People using Windows 7 are more likely to take a cautious approach, but at least now Microsoft has an answer for them -- a familiar look and feel that's also an improvement. Windows 10 is off to a strong start, and there is every reason to believe that will continue.

Microsoft may not gain market share, but it should at least stop the bleeding. That's a solid success for the new OS, and a reason for executives and investors alike to breathe a sigh of relief.