When it posts earnings on Friday, Sept. 11, Kroger (NYSE:KR) is likely to extend an impressive retailing streak: The grocer should book its 48th consecutive quarter of same-store sales growth.

But Wall Street isn't expecting particularly strong headline operating results for the past three months. Second-quarter revenue should tick higher by less than 1% as profits improve by about 11%.

2015 Q2 is the average forecast of the 20 analysts who cover the stock. Source Yahoo! Finance and Kroger financial filings.

Watch the comps
But Kroger's underlying sales growth should be much stronger than that 1% expected gain implies. Remember that gasoline prices are way down from the prior year, and the same goes for many food commodities. Both of those trends work against Kroger's reported sales growth while masking the solid volume and customer traffic improvements that it is actually seeing.

To get a clearer reading on growth, investors should focus on fuel-adjusted same-store sales figures. That number was a market-thumping 5.7% last quarter and should be close to 4% this time around. 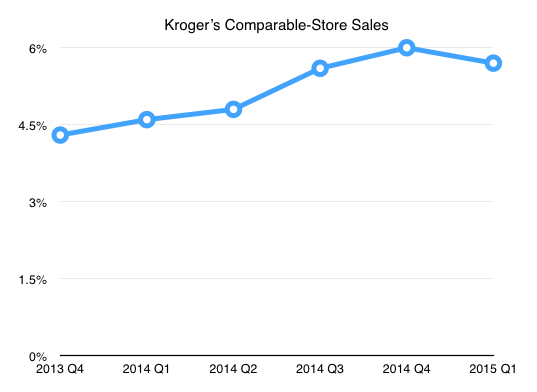 Anything above 3% would keep the company near the top of the list of all national grocery retailers, who posted comps of between 1% and 5% for the quarter that just closed.

Watch the cash
Kroger generated $1.8 billion of operating cash last quarter, or $61 million more than it produced in the prior year period. That growing cash flow has allowed management to quickly pay down the debt it took on for its 2012 acquisition of Harris Teeter -- while still spending heavily on stock buybacks and dividend raises. Share repurchase spending was $1.1 billion in the last 12 months, including almost $600 million last quarter. Kroger also in July hiked its dividend by 14%. 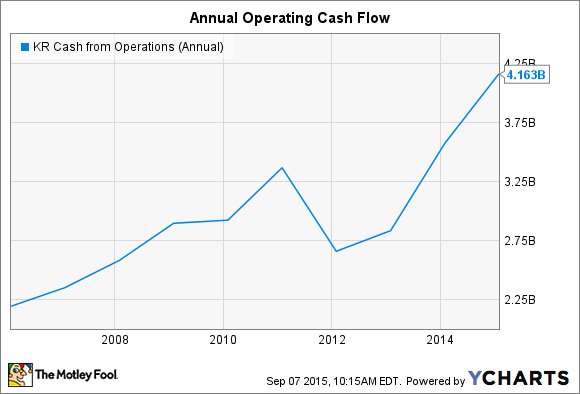 Shareholders can expect their cash returns to keep marching higher as long as management stays in their target range of at least 10% annual earnings gains. But the other big benefit of cash flow growth is that it gives Kroger more flexibility to go after expensive acquisitions like Harris Teeter -- without loading up the balance sheet with crippling debt. In fact, the company just reached its target leverage ratio six months ahead of schedule. That achievement suggests more large grocery store mergers might be in the cards over the next few years.

Watch the outlook
Despite the first-quarter profit beat, Kroger in June left its 2015 earnings guidance unchanged. Profit is still expected to rise by about 12% to $3.85 per share. But that conservatism has more to do with falling gasoline margins than any soft retailing results. That's clear from the fact that Kroger boosted its sales growth outlook for the year by 0.5 percentage points (comps are now forecast to hit 4% for 2015). Yet despite those improving business trends, the stock has fallen 14% from the all-time high it hit just before last month's market carnage.

Long-term shareholders shouldn't let the drop worry them since it isn't tied to any negative swing in the business. And that's what makes the stock's cheaper valuation of 18 times this year's earnings even more attractive. Kroger's shares are down over the last six weeks, but its operations are set to continue a streak of market share gains that's now reaching into its second decade.