Please ensure Javascript is enabled for purposes of website accessibility
Log In Help Join The Motley Fool
Free Article Join Over 1 Million Premium Members And Get More In-Depth Stock Guidance and Research
By Daniel B. Kline - Sep 8, 2015 at 8:53AM

Fears about the struggling Chinese economy brought pessimism to Wynn investors, who had ended July with a dose of bad news about Macau.

What: In addition to the general financial pressure facing casino companies due to increased competition in the United States and struggling markets across the world, Wynn Resorts Ltd. (WYNN 1.29%) has added exposure in the Chinese province of Macau, where gambling revenues have taken a hit.

Given the crumbling Chinese economy and regulatory measures that have clamped down on VIP gaming in Macau, this puts the company in a risky position, and its most recent earnings report showed that the weakness in Macau is hurting the bottom line. The company reported bad news about its Macau operations in its Q2 report on July 29, and while investors pushed the stock up in the days after that report was released, they began to send it lower in mid-August as broader concerns about China began to build.

Wynn ended August with its stock price 27% lower than where it started the month, according to S&P Capital IQ data. The first few days of September saw the stock drop more. 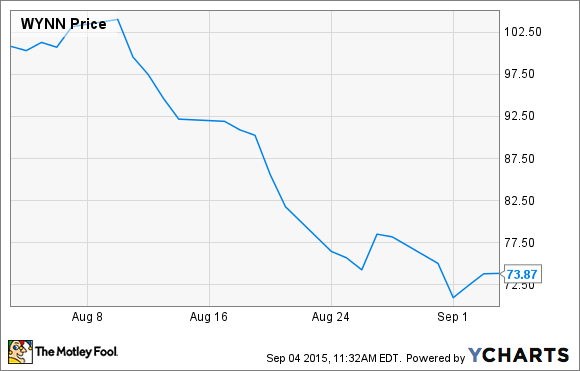 So what: The numbers reported on July 29 were not just a little bad -- they were wretched. Net revenue in the second quarter of 2015 dropped to $1.04 billion, from $1.4 billion in the second quarter of 2014. "The decline was the result of a 35.8% net revenue decrease from our Macau Operations and a 6.2% decrease in net revenues from our Las Vegas Operations," the company wrote in its earnings report.

The Macau revenue was down in a variety of categories for the quarter including:

Despite all of this ugliness investors were willing to ignore the numbers and Wynn stock held roughly steady through Aug. 13 when it began its most recent descent. That preceded the overall decline of the Dow, which began its own fall -- at least partially due to concerns over China -- on Aug. 19.

It seems likely that Wynn was a warning sign. Investors were willing to shrug off the bad news until it became clear that Macau (and China) were a bigger problem than reflected by a single quarter. The casino company's fall occurred ahead of the overall market collapse because of its direct ties to the pressures that would impact the Dow a few days later.

Now what: Wynn Resorts is still betting big on Macau with plans to build Wynn Palace, an integrated resort containing a 1,700-room hotel, meeting space, a casino, a spa, retail offerings, and food-and-beverage outlets in the Cotai area of Macau. The new property is expected to open in the first half of 2016. The company is also constructing a new property in Massachusetts, though no target date has been given for its launch.

Wynn Palace may help, but more capacity in a struggling market has not proven to be a good answer for the casino industry. This is a struggling stock that is likely to continue to struggle until market conditions in Macau change.