Market turmoil, the sale of the company's HERE mapping service, and ongoing news about the company returning to the smartphone market contributed to the company's fall last month. 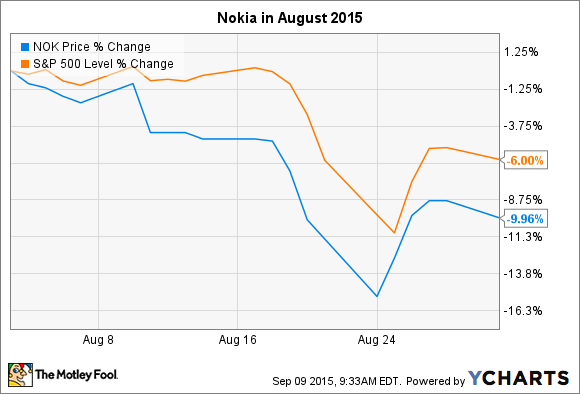 What: Nokia's (NOK -2.12%) stock dropped just shy of 10% last month, according to S&P Capital IQ data, and closely mirrored the market overall. But investors were likely influenced by the company's sale of Nokia's HERE maps, and more talk that the company will again enter the smartphone market.

So what: Nokia released earnings at the very end of July, with sales up 9% year-over-year to $3.56 billion, but down 1% on a constant currency basis. Meanwhile, adjusted earnings per share were up 50% to $0.10, much higher than analysts' estimates of $0.06.

That may have helped keep Nokia's stock slightly up at the beginning of the month, but the news that Nokia sold its HERE mapping service to German automakers for $3.1 billion wasn't great news for investors. Sure, the company gets an influx of cash right away, but in hindsight Nokia's foray into the maps business was a very expensive one.

HERE managed to eke out $1 billion in revenue in all of 2014, and accounted for about 9% of Nokia's total revenue.. While that doesn't sound all that bad, remember that Nokia bought its original mapping services from NAVTEQ for $8.1 billion, and now just sold it for $3.1 billion, eight years later. That's not exactly a great deal.

Now what: With HERE maps now sitting firmly in the hands of Audi, Daimler, and BMW, it would be natural to assume that Nokia will turn all of its attention toward its Network division. After all, about 90% of the company's revenue comes from the division and, lest we forget, Nokia is spending $16.6 billion to acquire Alcatel-Lucent to tighten up its networking grip.

But Nokia has decided it just can't keep away from the smartphone market, and I can't help but think investors are just a tad leery.

This time around, Nokia's leaving the manufacturing up to other device makers, and will instead design and license the phones to other companies. To comply with a non-compete agreement, none of this can officially start until late 2016, but Nokia's already busy hiring people and getting ready for its smartphone relaunch.

With the sale of HERE and the impending acquisition of Alcatel -- whose stock dropped a similar amount in August -- Nokia had the opportunity to set a laser-focused approach on networking. Now, it appears the company's just trying to settle a score with the mobile world. And if Nokia's new smartphone ambitions distract from its lucrative networking division, investors may ultimately pay the price.