Please ensure Javascript is enabled for purposes of website accessibility
Log In Help Join The Motley Fool
Free Article Join Over 1 Million Premium Members And Get More In-Depth Stock Guidance and Research
By Brian Stoffel - Sep 9, 2015 at 8:37AM

The company has suffered from being associated with 3D printing, but that's not the only reason for the steep fall.

As a shareholder in Organovo (ONVO -11.47%) for over two years now, I've always known that there were significant downside risks. When you are looking to totally redefine how drug companies go about testing their compounds -- not to mention the very act of 3D bioprinting human tissues -- you need to be able to handle volatility.

That message has been hammered home thus far in 2015, as shares of Organovo are down 63% so far this year, and 80% from all-time highs reached in late 2013. The stock's deterioration has two key causes, both of which warrant investigation, but neither should cause investors to flee.

The end of the 3D printing boom
Coming out of the Great Recession, there was no industry that benefited more from Wall Street hype than 3D printing. Just take a look at what happened to shares of large players like Stratasys (SSYS -0.27%) and 3D Systems (DDD -0.57%), and how Organovo more or less followed the same type of waves through the start of 2014. 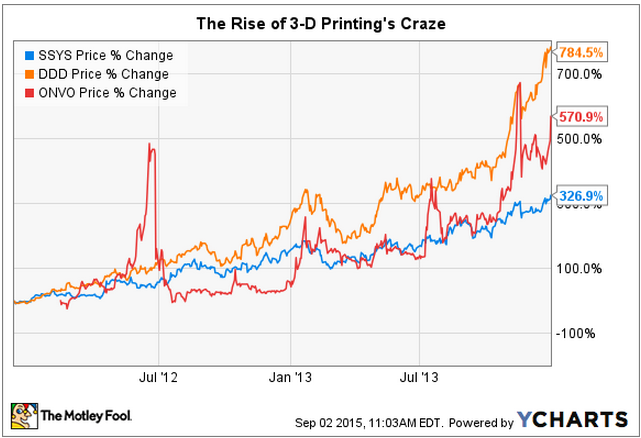 Eventually, however, hype surpassed reality and 3D printing stocks came back to earth. Not only that, but the actual companies (and not just the stocks) started to falter as well. Stratasys and 3D Systems, for instance, are now experiencing negative organic growth -- something that would have been unheard of just two years ago.

Since then, the entire industry has been in a free fall, and Organovo is no exception. 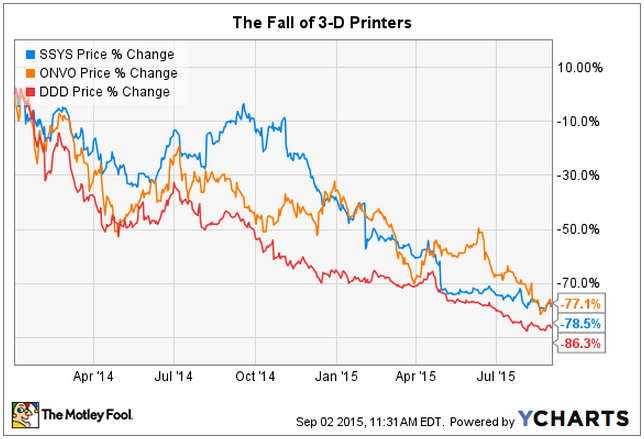 There's simply nothing that Organovo can do about these swings. The company's shareholders stand to both benefit and feel the pain of swings in market sentiment, and that's exactly what's happening right now.

But there's more to the story
Organovo, however, is a very different company than either Stratasys or 3D Systems. In fact, it probably never deserved to be lumped in with the other 3D printing players. Its product and business model have almost no overlap with traditional 3D players.

The company's first real product, exVive3D Liver, was launched at the end of last year. The goal of the product is to allow drug companies to realize possible liver toxicities before entering expensive clinical trials. In the end, killing the drug or making modifications could help save billions. CEO Keith Murphy did an admirable job of telegraphing to investors exactly what the flow of information would be like. He stated that adoption of exVive3D Liver would likely be slow at first and that revenue from contracts wouldn't show up until the most recent earnings release.

While investors were waiting for that time to come, however, the company announced an ambitious plan to widen its scope substantially -- focusing on owning drugs of its own and possibly selling its NovoGen Bioprinter and accelerating the release of newer tissues.

That led management to hold a secondary offering in June to raise roughly $46 million for the company's coffers. While the offering was successful, it diluted current shareholders by 12%, and nobody likes seeing their slice of the pie shrink.

Furthermore, Murphy laid a very disappointing bomb during the company's most recent earnings release: "We plan to update contract bookings not on a quarterly basis but on an annual basis." In other words, while investors can read between the lines and see that Organovo likely has about 12 or 13 contracts for use of its exVive3D Livery products, we shouldn't expect to get any updates on growth here until June 2016. That's a long time to wait, and investors have rightly showed their frustrations by bidding shares of the company down by 25% since then.

While Murphy's decision to withhold results over such a large time frame is frustrating, I still think it's worth investors' time to consider owning a small slice of this company (it accounts for less than 1% of my holdings), as the possible upside is massive. Only time will tell if the company can reach that potential.