Please ensure Javascript is enabled for purposes of website accessibility
Log In Help Join The Motley Fool
Free Article Join Over 1 Million Premium Members And Get More In-Depth Stock Guidance and Research
By George Budwell - Sep 10, 2015 at 8:17AM

What: Lexicon Pharmaceuticals (LXRX 5.99%) continued its seemingly life-long habit of going against the market last August -- with the stock gaining over 40%, as per data from S&P Capital IQ, while the entire biotech industry as a whole fell by double digits: 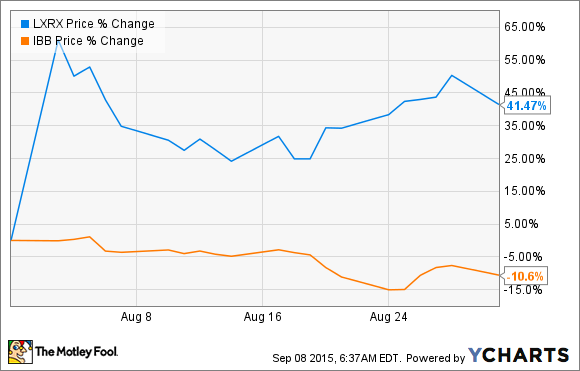 Lexicon's good fortune last month was due to the company's experimental drug, oral telotristat etiprate, reportedly meeting its primary endpoint in a pivotal late-stage trial as a potential treatment for cancer patients with carcinoid syndrome not adequately controlled by the current standard of care.

Specifically, Lexicon said that the 250 mg and 500 mg doses of oral telotristat etiprate both led to significantly lower incidences of daily bowel movements in the 12-week study. Carcinoid syndrome is described as a rare disorder that affects patients with neuroendocrine tumors, often triggering severe bouts of diarrhea.

So what: Lexicon has lingered in the clinical-stage biotech wilderness for over two decades at this point because of its inability to develop a commercial product. With this late-stage success, however, this rather lengthy drought appears to be at an end.

Now what: Lexicon plans on filing for the drug's regulatory approval with the U.S. Food and Drug Administration soon, meaning that it could be on the market sometime next year. Unfortunately, I think telotristat's approval is already baked into Lexicon's share price for the most part, given that the company now sports a hefty $1.2 billion market cap following this run-up, despite the fact that the company is expected to remain cash flow negative for the foreseeable future.

Although Lexicon does have another clinical candidate, sotagliflozin, indicated for Type 1 and 2 diabetes, I think investors may ultimately want to take a wait-and-see approach with this high flying biotech for the moment to let its remaining assets mature a bit further before buying shares.