Please ensure Javascript is enabled for purposes of website accessibility
Log In Help Join The Motley Fool
Free Article Join Over 1 Million Premium Members And Get More In-Depth Stock Guidance and Research
By Matthew DiLallo - Sep 10, 2015 at 11:01AM

What: Units of American Midstream Partners LP (AMID) were down more than 16% in early-morning trading on Thursday. Fueling the fall was the announcement that the company as issuing equity. However, the unit offering is necessary to fund the partnership's planned acquisition of a 25% interest in the Delta House floating production system.

So what: American Midstream Partners announced plans before the market closed yesterday to offer 7.5 million units while also granting underwriters the option to purchase 1.125 million additional units. Those units were priced this morning at $11.31 per unit. However, as the chart below shows, the company is issuing units at a much lower price than recent trading prices, suggesting more dilution than would have been necessary if it had acted a bit quicker. 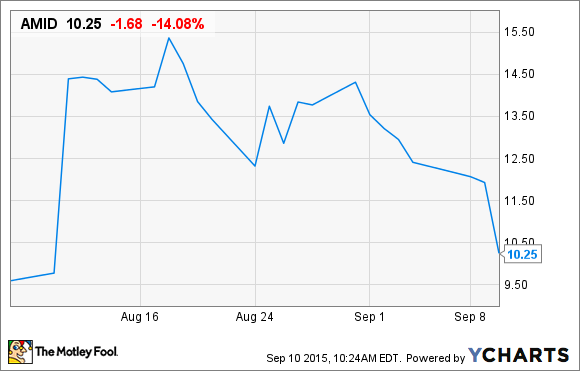 AMID data by YCharts.

What's worth noting is that American Midstream Partners' unit price exploded higher the day the initial deal was announced about a month ago, but has drifted lower since that time. In fact, as the chart above indicates, nearly all of the initial deal-fueled gains are gone.

That said, the reason the deal announcement drove such a positive response is that it made its future growth much more visible. This is because the acquisition of the interest in Delta House was expected to drive a 5% boost in the company's distribution to unitholders. It was a move that was lauded by analysts, two of whom promptly upgraded the company.

Now what: Unitholders are a bit disappointed that American Midstream Partners waited until most of the enthusiasm was out of the unit price before issuing equity, leading to a bit more dilution than necessary. However, the acquisition, assuming it does close, will provide more clarity on near-term distribution growth, which was the intention all along.

Why Units of American Midstream Partners Are Skyrocketing Today