Please ensure Javascript is enabled for purposes of website accessibility
Free Article Join Over 1 Million Premium Members And Get More In-Depth Stock Guidance and Research
By George Budwell - Sep 10, 2015 at 8:53AM

Agenus' high-flying ways came to a screeching halt in August.

What: Agenus ( AGEN -5.40% ), a small immunology company developing treatments for cancer and a diversity of infectious diseases, saw its shares drop by double digits last month, even outpacing the broader biotech industry's marked decline in August: 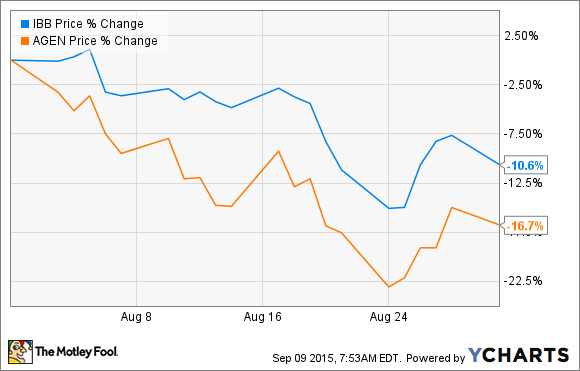 The good news is that this "leg down" wasn't triggered by a specific catalyst. Rather, it appears to be linked to the stock's incredible performance prior to the August blood bath that hit small-cap biotechs particularly hard. Specifically, Agenus' stock was up a whopping 114% heading into August: 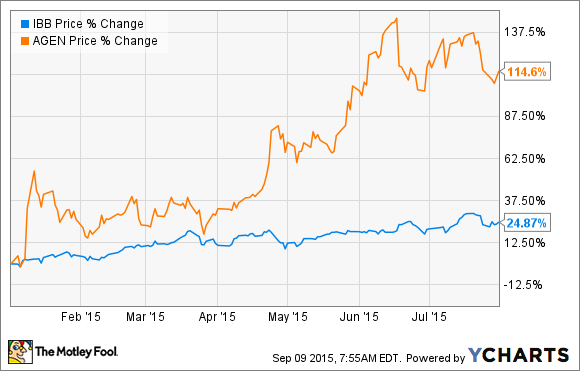 So what: Agenus' huge upward swing this year has mainly been the result of the company's expanding clinical activities in the red-hot area of immuno-oncology, fueled by its purchase of 4-Antibody last year and subsequently gaining the rights to antibodies targeting Carcinoembryonic Antigen Cell Adhesion Molecule 1 (CEACAM1) from Diatheva s.r.l. this year.

In other words, it wasn't the result of a specific clinical or regulatory catalyst, meaning that this rapid price appreciation is, at least partly, due to hype. That's not to say that this hype over immunoncology drugs, in general, and checkpoint inhibitors, in particular, isn't justified -- at least to some degree. But the market acted like a proverbial "man with a hammer" toward all of these types of stocks that soared earlier in the year based on their potential, not fundamentals.

Now what: Agenus' future as a player in the emerging realm of immuno-oncology is basically impossible to tell at this point because of the early-stage nature of its clinical efforts. On the bright side, it's developing several checkpoint inhibitors, and has signed research deals with major pharmas like Incyte Corp. and Merck, to help cover some of the costs.

Agenus also recently shored up its balance sheet in a big way via a $115 million non-dilutive financing deal with Oberland Capital. After closing this transaction, the company should now have around $200 million in cash and cash equivalents remaining, giving it an ample cash runway to develop these promising immuno-oncology assets.

While a fair value assessment of the company's clinical pipeline is tantamount to a guessing game at this point, I'm cautiously optimistic that Agenus does have enough irons in the fire to develop at least one single major oncology product within the next two or three years. Its improving financial situation should also keep dilution to a minimum until then.

Investors with a healthy appetite for volatility, and its bedfellow risk, may want to take a deeper look at this high-risk, potential high-reward biotech.