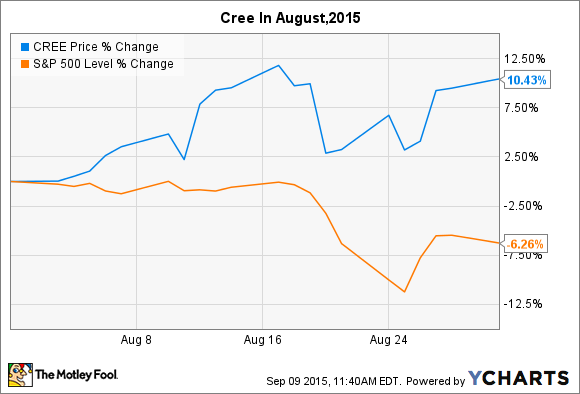 What: Shares of LED lighting veteran Cree (NYSE:WOLF) rose 10.4% in August, according to data from S&P Capital IQ. The company actually missed analyst expectations in a fourth-quarter report filed midmonth, but that event still triggered Cree's rise in August thanks to solid sales guidance.

So what: In the fourth quarter, analysts were looking for a net loss of $0.08 per share on roughly $385 million in sales. Cree posted an adjusted loss of $0.19 per share and $382 million of top-line sales, missing both of Wall Street's targets.

Looking ahead, management centered the first-quarter revenue guidance range around $420 million, far ahead of the then-current $403 million Street consensus. Cree expects to post positive earnings of approximately $0.21 per share in the coming quarter, in line with analyst projections.

Now what: Bear in mind that Cree plunged headlong in June, on the heels of a panic-tinted restructuring. At the time, average selling priced on LED lighting products were falling as always, but much faster than management had expected.

Against that backdrop, the fourth-quarter report was good news indeed. The optimistic revenue guidance repainted Cree's pricing picture in a much more favorable light -- even if the benefits of this improvement aren't guaranteed to drop all the way to the bottom line.

"The actions we took in Q4 to restructure our LED business position us for solid revenue growth and margin expansion in fiscal 2016, driven by the strength of our commercial lighting business," said Cree CEO Chuck Swoboda.

This is not the first time that Cree's revenue growth curve takes a break, or the first time the company's cash flows and earnings dip into negative territory. Cree investors are also getting used to the roller-coaster quality of this hyper-volatile stock. The company almost always seems to be on the verge of the next major breakthrough, paving the way to massive mainstream sales and profits -- until another price war or manufacturing mess comes along. As a result, Cree shares have largely traded sideways over the last decade, with many huge peaks and deep valleys in between.

Long story short, Cree does look poised for another big comeback from this terrifying two-year dip, which has removed more than 60% of the company's total market value. But was this the restructuring to end all restructurings, finally setting Cree investors on a path to serious long-term growth? That's a much harder call, and I'll settle for calling Cree a short-term trading toy right now. In other words, I'll happily stay on the sidelines.