The steep drop in the markets in recent weeks might be scaring away investors, but for those who maintain a buy-and-hold Foolish mentality, there are some great bargains available. Many high-quality blue-chip companies, with strong brands and dominant industry leadership positions, are selling off as short-term investors panic about shaky economic growth in China.

The Walt Disney Company (DIS -1.11%) is one such company. Disney stock is 16% off its 52-week high. But all that has done is create an excellent buying opportunity for long-term investors to scoop up shares of this great company at an attractive price.

Growth remains on track
Disney caused quite a stir when CEO Bob Iger acknowledged it experienced "some modest" subscriber losses last quarter for its flagship ESPN, the vast majority of which he said were due to decreases in multi-channel households. He also said it's seeing consumers, particularly younger ones, watching television in a different way from previous generations. This news stoked fears of the dreaded cord-cutting, in which customers switch from pricey cable subscriptions to much less expensive over-the-top options.

A deterioration in ESPN is a real concern, since Disney's cable networks represent 31% of its quarterly revenue. Indeed, Disney saw a decrease in advertising revenue for ESPN last quarter. But this was more than offset by growth in affiliate revenue. ESPN did well last quarter due to contractual rate increases as well as an increase in subscribers. Thanks to this growth, ESPN helped the cable networks business grow revenue by 7% last quarter, year over year.

Therefore, judging by Disney's growth throughout this year, there is little cause for alarm. Disney dominates its various businesses, including media, theme parks, its movie studio, and consumer products -- its four largest segments. Disney grew earnings per share by 16% through the first three fiscal quarters, as its four biggest businesses all grew revenue and operating profit.

Disney has a long track record of steadily growing earnings, thanks to its strong brands in media, theme parks, and its movie studio. The results speak for themselves. 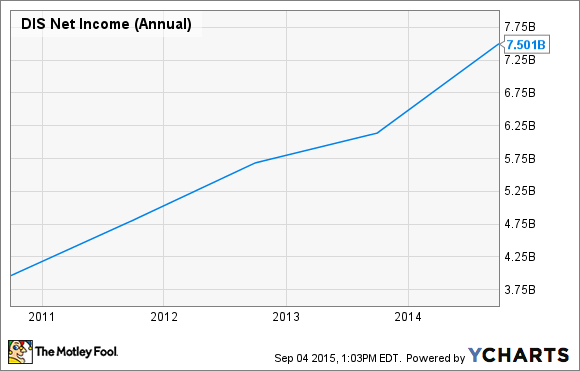 Disney is off to a strong start in the current year, and going forward, ESPN should be fine. ESPN is the go-to place for live sports. It has licensing agreements with the NFL, the NBA, and Major League Baseball that run into the next decade. ESPN is the premier brand in live sports, and management stated on last quarter's conference call that 96% of all sports programming is watched live. As a result, it's likely that even if consumers opt for an over-the-top package, the ESPN networks will continue to be heavily involved.

Disney looks attractive for growth and dividends
It's easy to get swept up by pervasive fear and falling stock prices, but Disney's growth remains well on track. And thanks to the declining stock price, the valuation is now more attractive than at any point so far this year. Disney now trades for 20 times trailing twelve month earnings, which is right at the market's average multiple. Consider that earlier this year, Disney had traded for 25 times earnings.

Another reason to like Disney stock now is that it has recently improved its dividend characteristics. Not only did the company announce a 15% increase to its dividend earlier this year, but Disney also said it would move to a semiannual dividend payment. Previously, Disney had paid its dividend only once per year; it's far more customary for companies to pay dividends quarterly. Moving to pay dividends twice per year will help Disney investors compound their dividends twice as fast as before, and the strong dividend raise brings Disney's dividend yield to a more respectable 1.3%.

Disney's growth remains on track, and with a modest valuation and decent dividend yield, investors buying in at these levels are getting a great company at a good price.