Please ensure Javascript is enabled for purposes of website accessibility
Log In Help Join The Motley Fool
Free Article Join Over 1 Million Premium Members And Get More In-Depth Stock Guidance and Research
By Steve Symington - Sep 10, 2015 at 10:00AM

The animated-entertainment company is suffering despite a strong second quarter. Here's why.

What: Shares of DreamWorks Animation SKG (DWA) fell 17.3% in August, according to S&P Capital IQ data, despite what the company described as "solid" second-quarter 2015 results. After handily beating the broader market's returns for much of 2015, that plunge leaves shares of the animated-entertainment studio down nearly 7% year to date: 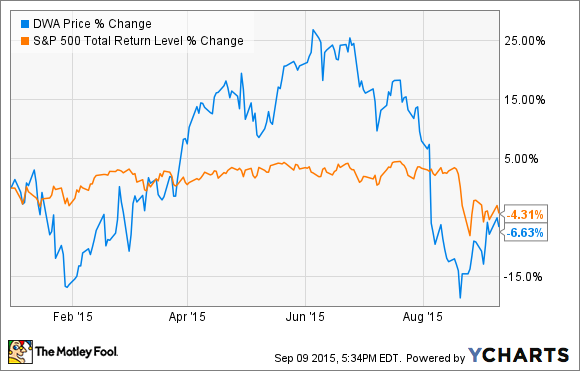 So what: Ironically, DreamWorks' second-quarter report was indeed solid relative to Wall Street's expectations. Quarterly revenue climbed 39.7% year over year to $170.8 million, well above consensus estimates for $167 million. And though that translated to an adjusted net loss of $11.6 million, or $0.13 per share, analysts were anticipating an even wider adjusted net loss of $0.26 per share.

DreamWorks credited a combination of the theatrical success of Home -- which drove a 26% year-over-year increase in Feature Film revenue to $88 million -- as well as Television segment revenue that more than doubled over the same period to almost $55 million, thanks to significant growth in the number of episodes delivered under its content licensing agreements. In addition, DreamWorks' up-and-coming New Media segment -- which includes AwesomenessTV and Big Frame -- enjoyed 103% growth in revenue to just under $15 million.

At the same time, however, revenue from DreamWorks' Consumer Products segment declined more than 30% year over year, as revenue was primarily derived from licensing arrangements related to IP rights associated with characters in DreamWorks' feature films. By contrast, last year's second quarter enjoyed a big boost from both merchandise and licensing revenue from the June 2014 release of How to Train Your Dragon 2.

Sure enough, DreamWorks stock plunged during the subsequent earnings conference call after management told investors that Consumer Products isn't growing as quickly as they had hoped. As such, the company no longer anticipates achieving the revenue or gross profit guidance it previously offered for the segment. Still, CEO Jeffrey Katzenberg later insisted: "We don't think its a systemic issue. We think it's more a timing issue."

Now what: It's obvious the market was hoping for more on the Consumer Products front, which holds vast potential to reduce DreamWorks' current over-reliance on blockbuster media properties for driving results. And though the company indicated a stronger finish to the year, it's also evident that DreamWorks has plenty of work to do if it wants to deliver on that potential.

To their credit, however, DreamWorks management also noted that they remain on track to meet overall guidance for full-year operating income. With three operating segments performing above expectations right now, DreamWorks could effectively be firing on all cylinders if it manages to bring its Consumer Products segment up to par later in 2015. In the end, that's why I think DreamWorks stock at today's levels could prove a bargain for investors willing to take advantage of the drop.