Please ensure Javascript is enabled for purposes of website accessibility
Log In Help Join The Motley Fool
Free Article Join Over 1 Million Premium Members And Get More In-Depth Stock Guidance and Research
By Chris Neiger - Sep 10, 2015 at 10:23AM

Though market trends likely contributed to NXP's drop, seemingly bad news from its management may have fueled investor pessimism as well.

This article was originally published on Sept. 10, 2015. It was updated on Feb. 1, 2016. For the latest information on NXP Semiconductors' stock, click here. 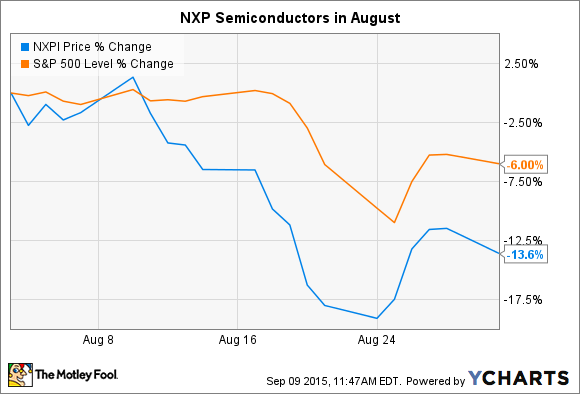 What: Despite a great second quarter, NXP Semiconductors (NXPI 4.89%) fell 13.6% in August, according to data from S&P Capital IQ. Aside from following the market's downward trend, some NXP investors may have made the decline worse by misinterpreting the company's earnings call.

So what: One thing that may have spooked NXP investors was some cautionary language coming from NXP CEO Rick Clemmer. On the earnings call at the end of July, Clemmer said:

While we're pleased with the results of the second quarter and our view of continued share gains in our target markets, we have witnessed a clear change in market demand. Conversations with both customers and channel partners reflect an increased sense of caution.

He added that the company may see a "slower growth macro environment but not a material downturn."

That may sound less than ideal, but it's important to remember that the company's net margins improved from just over 20% to more than 23%, which should help offset some slower growth.

Part of the slowdown comes from the company's exposure to the smartphone market, in which NXP makes near-field-communication (NFC) chips for Apple and others. Clemmer noted on the call that "clearly, there are areas where we're not seeing as robust demand as people would have planned" and added that China has been slower to adopt NFC technology than it would like. That corresponds with IDC data that shows smartphone shipments are slowing down in 2015, even faster than initially expected.

Now what: The problem with taking some of the above issues to heart is that NXP's latest quarter shows the company is in fantastic financial shape, and any bumps in the smartphone road will hardly send it off course.

Remember that NXP is also an Internet of Things company, and makes chips for more than just mobile players. NXP hit an all-time revenue high of $310 million from its automotive segment in Q2, and the company expects more growth from the auto market going forward.

Even more importantly, NXP will soon finalize its purchase of Freescale Semiconductor, and when it does, the combined company will be the fourth-largest semiconductor maker and the top semiconductor supplier to the automotive industry. Bringing in Freescale's technology will also add a new level of security to automotive chips, something automakers are in desperate need of right now.

So while investors may be concerned about NXP's smartphone chips sales, investors should look to the company's strong position in automotive processor sales and its forthcoming position as a chip-producing powerhouse, once it closes the deal with Freescale.