What: Global pharmaceutical giant AbbVie (ABBV 0.73%) got caught up in the market's madness during August as the company's stock lost more than 10% of its value during the month, according to S&P Capital IQ.

So what: Even though shares managed to slide in August, that doesn't mean anything bad happened. In fact, the company is in terrific financial shape, with its reported second-quarter results exceeding analysts' expectations. Revenue during the quarter was more than $5.4 billion, up a strong 19% over the year-ago period. Adjusted earnings for the quarter, which excludes some of the one-time costs related to its huge $21 billion Pharmacyclics acquisition, were $1.08, up a strong 31% over the year-ago period.

Looking at AbbVie's individual products, sales of the company's flagship anti-inflammatory drug Humira increased 7.6% around the world to $3.5 billion and would have been much higher if not for currency headwinds. Sales of Viekira Pak, AbbVie's recently-launched hepatitis C treatment, landed at $385 million, and this figure is expected to continue to grow strongly throughout the rest of the year. Sales of Imbruvica, the company's chronic lymphocytic leukemia treatment that was recently added to its portfolio through the Pharmacyclics acquisition, landed at $234 million, though the company was only allowed a portion of that revenue on its books, as the acquisition was finalized during the quarter.

This strong sales growth coupled with the amounts booked in the first quarter have management expecting adjusted earnings for the year to land between $4.10 and $4.30 per share . 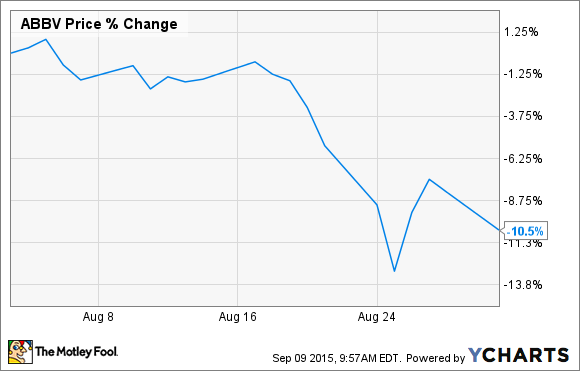 Now what: Although shares of this behemoth are down since the start of the year, I think there are a lot of reasons to be bullish on AbbVie's stock form here. While the sheer size of the Pharmacyclics acquisition may put some temporary pressure on reported results, AbbVie's management team expects the deal to be accretive by around $0.60 per share by 2017. The acquisition also helps to diversify the company's revenue base away from Humira, from which AbbVie still derives the bulk of its revenue.

Looking a few years out, analysts expect profits to grow by 17% per year, which is a quite a rapid pace for a company that's only trading for around 12 times expected 2016 earnings. When you combine its juicy 3.4% dividend yield to the mix, it might be a great time for opportunistic investors to add this dividend dynamo to their portfolios.