After the recent stock market correction, it's a good time to look for some bargains.

With the S&P 500 and other indexes still close to correction levels, it's a good time to do some bargain-hunting -- and there are several of them to be found in the banking sector. We asked three of our contributing writers to share their favorites. Here's why they think now is the time to buy Toronto-Dominion Bank (TD -1.11%), BofI Holding (AX -0.95%), and Morgan Stanley (MS -0.43%).

Matt Frankel: Toronto-Dominion Bank, known simply as TD Bank to most people, is one of my favorite banks and happens to be trading for a deep discount right now. In fact, TD hasn't traded at a price-to-book valuation this low since 2011.

The stock is down 25.8% over the past year because of a combination of factors. First, the general weakness in the market has had something to do with TD's decline. Second, weakness in the energy market has created uncertainty, as TD Bank has a substantial amount of loans to energy companies on its books. Third, foreign-exchange fluctuations have cut into TD's profits. Much of the bank's revenue is in Canadian dollars, the value of which has fallen considerably over the past year: 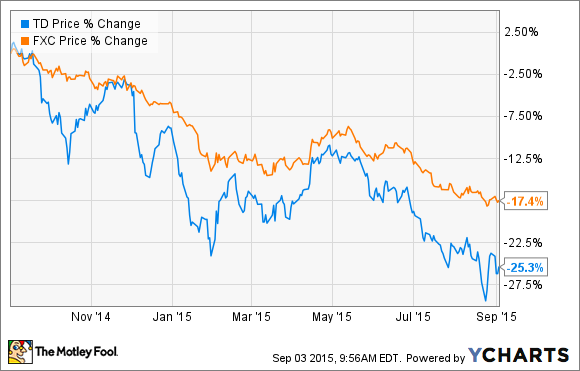 Despite the price drop, there are some good reasons to own TD Bank. The bank is focused on the retail side of the business, putting more emphasis on customer service than most of its peers. Known as "America's Most Convenient Bank," TD branches are open late at night and on weekends, catering to people who don't want to visit a bank during "bankers' hours."

The bank also has a strong history of growth, both organically and through acquisitions, which have combined to produce an average total return of more than 10.5% over the past 15 years -- even after the terrible year it just had. No large U.S. bank delivered returns like this, and I think now is an excellent time to get into this long-term winner at an excellent price.

Eric Volkman: At its current price, I think that BofI Holding is a terrific bargain, even if it's not the cheapest stock in the banking sector.

BofI Holding's flagship asset is online-only lender Bank of the Internet. In and of itself, this is an immense advantage, as its costs are far below those of traditional bricks-and-mortar banks.

As a result, BofI Holding's efficiency ratio is, comparatively speaking, off the charts. This important metric for banks, which measures expenses as a percentage of revenue, stood at a skinny 32% at the end of its Q4. That trounces Bank of America's recent 62%, and US Bancorp's 53%, for example.

And although it's hardly a new company, BofI Holding is performing like a young enterprise on fire. In its just-reported fiscal 2015, net income ballooned to nearly $83 million, 48% higher than the 2014 tally. Loans (net of allowances for losses) rose a hearty 40% to $4.9 billion.

Earlier this year, BofI Holding's stock was a high-flyer among its peer group. But since the market's swoon last month, it's down more sharply than many of its rivals. That presents a great opportunity to buy this solid bank at a very attractive discount.

Dan Caplinger: One place that many investors never think of in the banking sector is the investment banking realm, which embraces exposure to the financial markets while depending a lot less on retail banking products like credit cards and checking accounts. Morgan Stanley has recovered well from the financial crisis in 2008 and 2009, and the boom in the U.S. economy has led to accelerating activity in the merger and acquisition field that directly benefits Morgan Stanley in its underwriting business.

Some investors are nervous about Morgan Stanley now, though, with the plunge in oil prices having hurt a key M&A center in the energy industry and with the prospects for further stock market declines calling into question how long the bull market can last. Still, the company's wealth management division has remained strong, and even though a drop in underwriting activity would hurt immediate revenue and profit opportunities, it nevertheless represents a normal cyclical pattern that investors shouldn't overreact to. With the stock already having fallen as though a bear market were a near certainty, Morgan Stanley looks attractive to value-seeking investors who want a chance to buy shares of the investment banking company at a relative bargain compared to recent levels.