When the Federal Reserve starts to raise rates, here are three REITs you may want in your portfolio. 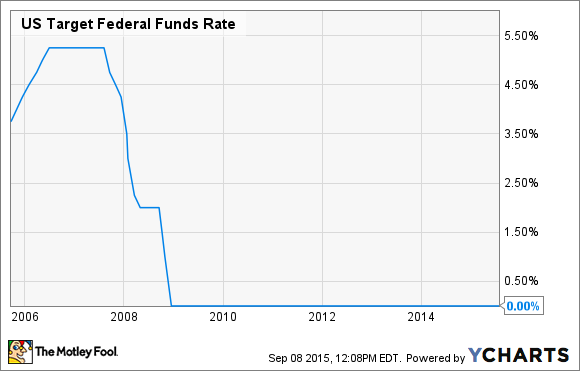 The Fed has kept interest rates at record lows for over six years. With the right stocks, you can prepare yourself for the inevitable rising rates on the horizon.

With the recent volatility in the market, it's entirely possible that the Federal Reserve will hold off on its much-anticipated interest-rate increase. However, sooner or later, interest rates will begin to rise. In the meantime, you can prepare your portfolio with these three REITs, which our experts believe could perform well in a rising-rate environment.

The debt is low enough that the company earns enough to cover its interest payments 4.6 times over, meaning there's lots of room to absorb negative market conditions, but it's the makeup of the debt that's the most important thing. Only 2% of its debt is at a floating rate, and the company has done a good job of refinancing its maturing debt at lower interest rates. In other words, even if rates rise, National Retail Properties' existing debt won't get any more expensive.

Sure, the company will experience some spread compression if rates rise, but the company has historically produced cap rates (initial annual returns) of 8.2% on its properties, so the company can continue to acquire properties profitably if spreads narrow.

Finally, the nature of National Retail's business should offer some protection when rates rise. All of the company's tenants are on long-term (15 to 20 years) triple-net leases, which have annual rent increases built right in. Combined with the abundance of fixed-rate debt and an industry-high 98.8% occupancy rate, it makes National Retail's income stream extremely predictable for years to come, no matter what interest rates do.

Jason Hall: While so-called mREITs will as a group be the most exposed to interest-rate increases because of the way they make money on the spread between short- and long-term rates, there are plenty of REITs out there that aren't exposed to rates in the same manner and to a much lesser degree. One of my favorites is Retail Opportunity Investments Corp. (ROIC 1.60%).

ROIC, as the company is commonly known, has an excellent manager in CEO Stuart Tanz and has taken an aggressive approach as expanding its portfolio of retail properties. ROIC largely focuses on retail properties that already have a large, preferably grocery-based anchor tenant in place, and in a market with strong economic factors to support strong business.

Retail and commercial property may be a worrisome business for some, but Tanz and company have taken a smart approach to finding the best properties, versus bargain-bin real estate with limited demand. This approach has led to strong cash flows, and a strong dividend payout that's almost tripled from $0.06 per quarter in 2010 to $0.17 per quarter (about a 4% yield) today.

Yes, the company does have some interest-rate exposure, since it uses some debt to finance properties, but rising interest rates aren't unlikely to correlate with lower rent payments. As a matter of fact, the Fed is likely to only rise rates in a strong economy, and that would be a great sign for ROIC's prospects.

Dan Caplinger: Most real estate investment trusts that own mortgage-backed securities have a lot of interest rate risk, but Two Harbors Investment (TWO 2.05%) has taken steps to control that risk by owning a diverse set of assets. In addition to regular mortgage-backed securities, Two Harbors also owns non-agency-backed securities that include jumbo loans and other mortgages that are less sensitive to interest rate changes than traditional agency-backed mortgage paper. In addition, Two Harbors invests in mortgage servicing rights, and the income that comes from servicing mortgages actually rises when interest rates climb as borrowers are less likely to prepay their loans to refinance or take advantage of other deals elsewhere.

It's true that Two Harbors takes on a measure of added risk from taking these positions, as when interest rates fail to rise, some of the tactics that the REIT uses don't always reward shareholders as much as if the company simply used a more traditional strategy. In addition, some of Two Harbors' assets are of lower credit quality and therefore have increased risk of default. All told, though, many investors are happier with these hedges against higher rates even if it costs them some potential profit in the short run, especially given the near-certainty that many have about the Federal Reserve's imminent future path for interest rates.