Spending on Internet of Things (IoT) devices and services, which connect everyday objects to each other and the cloud, could soar from $656 billion in 2014 to $1.7 trillion by 2020, according to research firm IDC. To tap into that growth, IBM (NYSE:IBM) and chip designer ARM Holdings (NASDAQ:ARMH) recently announced a partnership to strengthen each other's IoT businesses. 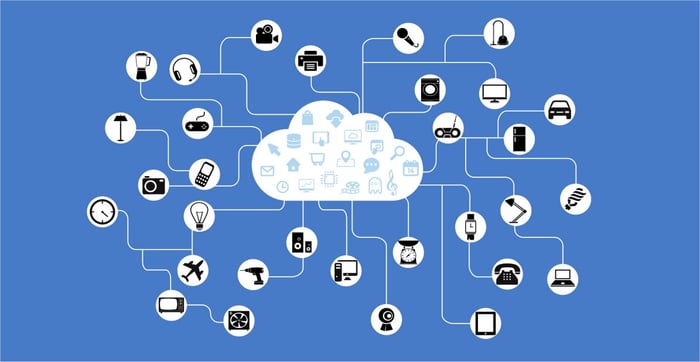 In a press release, IBM stated that the integration will let it gather, analyze, and process "huge quantities of data" from various objects, including wearables, weather sensors, and industrial appliances. ARM's IoT General Manager Krisztian Flautner believes that the collaboration will produce the world's "first unified chip-to-cloud, enterprise-class IoT platform."

How the partnership will help IBM
Over the past few years, IBM has struggled with sluggish demand for its IT services and weakness in lower-margin hardware businesses. To streamline its operations, Big Blue has aggressively divested its slower growth and lower margin businesses while investing in more promising ones.

Today, IBM relies on five "strategic imperatives" -- the cloud, data analytics, mobile, social, and security units -- to diversify its top line away from its older businesses. Last year, revenue from those five businesses rose 16% and accounted for 27% of IBM's top line. The company expects that percentage to rise to 44% by fiscal 2018.

The common thread that weaves through its strategic imperatives is the Internet of Things. That's why IBM established a dedicated IoT unit earlier this year and pledged to invest $3 billion in the business over the next four years. The unit will promote the Bluemix IoT platform as a service to help developers create custom analytics apps for connected devices. Its new IoT for Electronics platform also complements Bluemix IoT by letting electronics manufacturers gather data from sensors that can be merged with other data for real-time analysis.

Last year, IBM invested $1 billion to create a dedicated business unit for Watson, its data-processing AI platform, and another $1.2 billion to boost the growth of its cloud-based businesses. By forging a partnership with ARM, IBM gains more sources of IoT data to process, which can boost its strategic imperatives revenue across the board.

How the partnership will help ARM
ARM marginalized Intel (NASDAQ:INTC) in the mobile chip market by licensing its chip designs to a wide variety of chip makers. Its cheap and low-power designs were better received than Intel's comparable chips, and ARM-designed chips now power about 95% of all smartphones worldwide.

To address security concerns regarding IoT devices, ARM acquired security firms Offspark and Sansa Security to beef up mBed's defenses. With the integration of IBM's cloud-based security solutions and analytics capabilities, mBed becomes an even tougher OS for hackers to crack.

However, ARM still faces fierce competition in the IoT chip and RTOS market from Intel, which established its own IoT unit in late 2013. Intel is betting that its dominance of the PC and Data Center chip markets will help it sell its new IoT modules. Intel bundles its IoT RTOS VxWorks and security solutions together in a package known as the IoT Gateway, which can also connect to IBM's IoT Foundation platform.

A win-win deal
The deal between IBM and ARM is clearly a win-win deal for both companies and ARM-licensed chip makers. IBM can collect more data in a more efficient manner from ARM-powered devices, which should strengthen its strategic imperatives. With IBM's support, ARM gives IoT device manufacturers a compelling reason to use ARM chips and mBed instead of competing hardware and software. That, in turn, should boost market demand for its Cortex-M designs.