Please ensure Javascript is enabled for purposes of website accessibility
Log In Help Join The Motley Fool
Free Article Join Over 1 Million Premium Members And Get More In-Depth Stock Guidance and Research
By Jeremy Bowman - Sep 11, 2015 at 8:59AM

Shares of the media giant took a spill last month. Here's what you need to know. 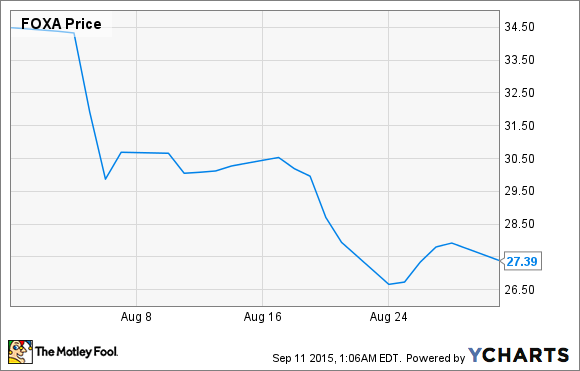 So what: Fox's underwhelming month was primarily the result of a two-day period that saw the stock shed 14%. Fox delivered disappointing earnings results just as rivals were doing the same. The media giant reported that revenue fell 9.3% in its most recent quarter as ad sales from its TV properties declined and its studio division failed to produce a major box office release.  Investors seemed most concerned about the decline in advertising income, as operating income from its television division fell from $145 million to $113 million. Operating income from its cable channels' affiliate fees rose slightly, but not enough to counteract that loss.

Now what: Cable network programming makes up the majority of Fox's profits, so the threat of cord-cutting looms large. A global company, many of Fox's most-prized cable properties are in the sports world, such as Fox Sports 1 and STAR Sports, which televised the ICC Cricket World Cup, but the company also counts namesakes Fox News Channel and FX among its key networks.

Sports networks were thought to be stickier than others, but Disney sent shockwaves through the cable world when it reported that its ESPN has been losing subscribers. Aside from Disney, Fox would seem to be the company that stands to lose the most from this development, and the possibility of cord-cutting accelerating should put a ceiling on the stock's potential appreciation. Management announced a $5 billion share repurchase program at the time of the earnings release to assuage investors, but the cable business model seems riskier and riskier. Unless the company can find a way to drive affiliate fees and advertising income higher, I'd expect shares to underperform.