Buying shares of GoPro stock allows me to participate in a revolution in digital media. Photo: GoPro

I don't own a GoPro (NASDAQ:GPRO), and I'm not an expert in the technology that has made the tiny cameras a smashing success. And yet, last week, after it fell over 30% from its August highs, I devoted over 2% of my family's real-life holdings to GoPro stock.

Some might argue -- fairly -- that making such a decision without more due diligence is (small f) foolish. But there are a few underappreciated traits of GoPro that make it a very compelling stock for me. Read below to find out why, and see if you agree.

Every year, I do a thorough review of my retirement portfolio. This year, I noticed something striking: my best performing stocks all shared a key characteristic -- they were all led by founders/CEOs. But the similarities didn't stop there:

The largest of these positions are in companies like Amazon, Baidu, Starbucks, Alphabet, and Facebook. When I broke these (founder-led) stocks out to measure how they performed, the results were astounding. Over the past six years, this cohort has returned an average of 19.5% per year, besting the S&P 500 by over 6 percentage points.

Why GoPro stock fits this mold
Spurred by the GoPro's 30% fall over the past month, I started digging into the company. I liked what I saw.

Founder Nick Woodman still runs the company as the CEO. He also owns 89% of the company's Class B shares, and retains roughly three-quarters of GoPro stock's voting power. Shareholders can rest assured knowing that Woodman is just as incentivized to make GoPro a long-term winner as they are.

In addition, Woodman is clearly trying to build the type of company that can be transformational. The company's mission is to "help people capture and share their lives' most meaningful experiences with others -- to celebrate them together."

I have a feeling that such a goal means that the GoPro we see today may look very different from the GoPro that exists ten years from now, while accomplishing the same fundamental goal.

For reference, consider how Amazon's Jeff Bezos' goal was to create a company with the best customer service on the planet. Such a goal has given Amazon the option of expanding far beyond books, with its tentacles stretching into every imaginable corner of retail.

GoPro's foray into GoPro Original Productions and the channel that it hosts on its website are evidence that what we could be seeing is the start of an unorthodox, semi-vertically integrated production company.

Culture trumps, always
Finally, from the evidence that's available for me to view, it seems like Woodman is doing a great job of building the type of culture at his company that can produce greatness over time. According to the site Glassdoor.com, GoPro is in the upper-echelon of workplaces. 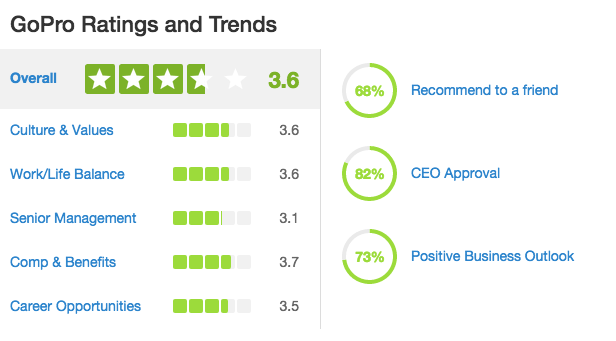 If we back up and look at the bigger picture, you can see why -- even without expertise in the field -- I think it's worth devoting a small part of my portfolio to this company: it is founder-led, with a mission that could carry it far beyond where it is today and a workforce that is motivated to help the company get there.

Over the next 12 months, revenue is expected to grow 23%. Currently trading for just 20 times forward earnings, I think investors have an opportunity to get in on a quality company at a more-than-fair price.