Please ensure Javascript is enabled for purposes of website accessibility
Log In Help Join The Motley Fool
Free Article Join Over 1 Million Premium Members And Get More In-Depth Stock Guidance and Research
By Joe Tenebruso - Sep 11, 2015 at 11:54AM

The retailer's recent struggles may point to greater trouble ahead. 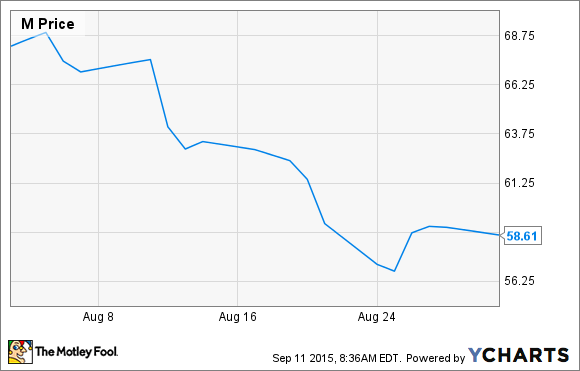 What: Shares of department store giant Macy's (M 2.27%) dropped by 15% last month, according to S&P Capital IQ data. Investors weren't impressed with Macy's second-quarter earnings release on Aug. 12, and concerns are increasing that the company's current struggles could be a sign of greater trouble ahead.

So what: Macy's second-quarter results came in below Wall Street's estimates. Sales declined 2.6% to $6.1 billion, driven by a 1.5% decline in same-store sales. Earnings per share fell 20% to $0.64 per share, compared to analysts' estimates for $0.76, and net income plummeted 26% to $217 million. The poor results also led Macy's management to reduce its 2015 full-year sales outlook to down 1% from 2014, compared to its previous guidance for a 1% increase in sales.

Now what: Macy's is taking a multipronged approach to combat these issues. It's closing underperforming stores, building out its online and same-day delivery capabilities, and exploring ways to monetize its valuable real estate holdings.

Yet the core problem is that Macy's, like other primarily brick-and-mortar retailers, finds itself on the wrong side of a powerful trend: the relentless growth of e-commerce. Juggernaut Amazon.com continues to take share in the apparel market, and that's a trend that's likely to continue for the foreseeable future. As such, Macy's remains a high-risk investment.