What: Shares of MannKind (MNKD 5.73%), a biopharmaceutical company focused on developing medicines to treat diabetes, were pummeled in August as the company shed more than 11% of its value during the month, according data from S&P Capital IQ. 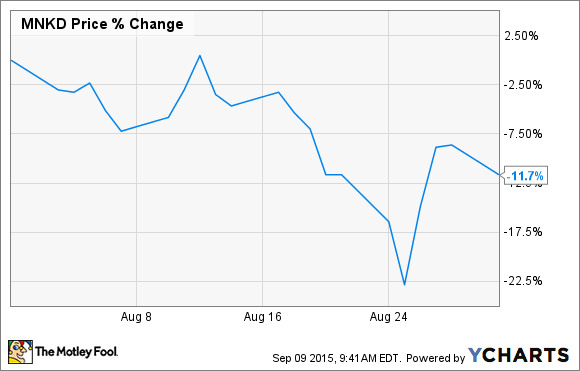 So what: MannKind reported second-quarter earnings during the month, and investors appear to be unimpressed with what the company had to say. While it managed to ship $5.9 million worth of Afrezza, its inhaled insulin, during the quarter, the actual sell-through to patients that was reported by marketing partner Sanofi was a much more meager $2.2 million.

That $2.2 million was up slightly from the $1.1 million that Sanofi sold during the first quarter, but as Afrezza was only launched halfway through the first quarter, it isn't an apples-to-apples comparison. When you adjust for that timing difference, sales of Afrezza really start to look anemic, and investors fled the stock in response.

Now what: It's been a very tough year for MannKind bulls -- the market opportunity for Afrezza continues to look massive, but results from the first two quarters have been extremely disappointing. 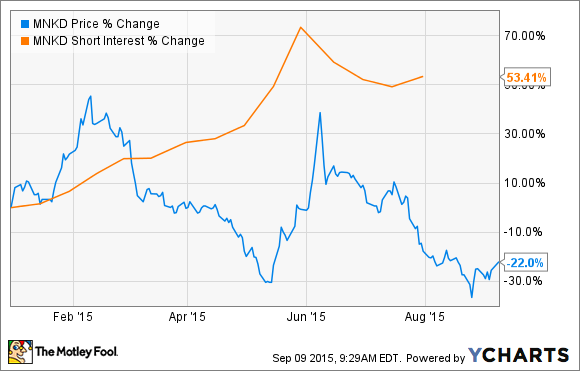 During the most recent investors' call, MannKind's management team offered plenty of reasons for why the initial rollout of Afrezza has been so slow, with insurance coverage now being identified as the biggest gating factor. Management indicated that discussions with insurance companies have already begun to help expand Afrezza's coverage, which they believe will help to increase access to the drug and spur patient and physician demand. The company is also starting a few direct-to-consumer campaigns in an effort to build awareness.

A lot of questions remain unanswered about the future of Afrezza, and while it certainly still could go on to become a blockbuster drug, I think Wall Street is right to be skeptical based on the results provided so far. MannKind is officially in "show-me" mode, and unless they start to surprise on the upside, I think investors would be right to keep away from this stock.

Brian Feroldi has no position in any stocks mentioned, and neither does The Motley Fool. We Fools may not all hold the same opinions, but we all believe that considering a diverse range of insights makes us better investors. The Motley Fool has a disclosure policy.