Please ensure Javascript is enabled for purposes of website accessibility
Log In Help Join The Motley Fool
Free Article Join Over 1 Million Premium Members And Get More In-Depth Stock Guidance and Research
By Daniel Sparks - Sep 12, 2015 at 8:40AM

Investors have good reason to be concerned about Twitter's (TWTR) long-term growth potential. But investors shouldn't let the stock's dramatic slide from a 52-week high of $56 to around $27 today fool them to believe the company's growth is suddenly getting snuffed out. A look at some of Twitter's underlying key business metrics suggests there is plenty more growth ahead.

Here are three reasons Twitter's business looks poised to continue to grow, even amid the social media company's current struggles with user growth.

1. Revenue is soaring. Yes, soaring. This isn't the sort of terminology investors would expect to hear when referring to a company whose stock is down about 50% in the past 12 months. But despite the doom-and-gloom scenario painted by the fast-falling stock, this is Twitter's reality.

Twitter's second-quarter revenue of $502 million was up 61% from the year-ago quarter. Even more, this 502 million in revenue was above expected revenue of $470 million to $485 million during the quarter.

And this revenue growth understates the company's execution when it comes to growing sales during the last 12 months. Excluding the impact of changes in foreign exchange rates, revenue was up 68% year over year.

Twitter's international revenue isn't unimportant to the company's financial results by any means. At 36% of revenue, its outsized revenue growth is playing an increasingly larger role in helping the company grow its business.

3. Twitter's monetization metrics look solid. The key driver behind Twitter's revenue growth has been its excellent execution in monetizing its service. There's clear evidence of Twitter's solid performance on this front by looking at the year-over-year changes in ad engagements and cost per ad engagements. 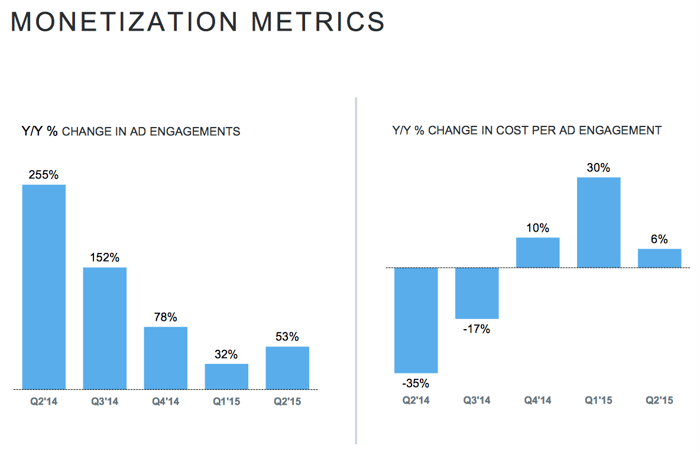 Ad engagements, which refer to the number of times a user interacts with an advertisement, were up 53% from the year-ago quarter in Q2. This marks a reacceleration from Q1's year-over-year growth of 32% in ad engagements. While Twitter did say some of this increase was simply due to an increase in ad load and growth in audience, management also said it was affected positively by the addition of autoplay video ads.

If Twitter is doing this well with revenue growth, international opportunities, and its ad products, why is the stock down? The short answer is that expectations for the Twitter's business were probably too high. But with the stock selling off so significantly, it's looking like this fast-growing business may be oversold.