JinkoSolar, Inteliquent, and Advanced Micro Devices didn't settle for a good Labor Day week, reaching for a great one instead. Here's how.

This was a short market week thanks to Labor Day keeping stock exchanges quiet on Monday. In the four days that remained, it looked like the bullas are back in town. The S&P 500 index rose 2.1%, a mere rounding error ahead of the Dow Jones Industrials' 2% gain. The tech-heavy NASDAQ Composite market barometer stole the show with a 2.9% rise.

But some tech stocks stretched the positive market tenor to extremes.

Want to dig deeper into these market-beating tech stocks? Let's get started. 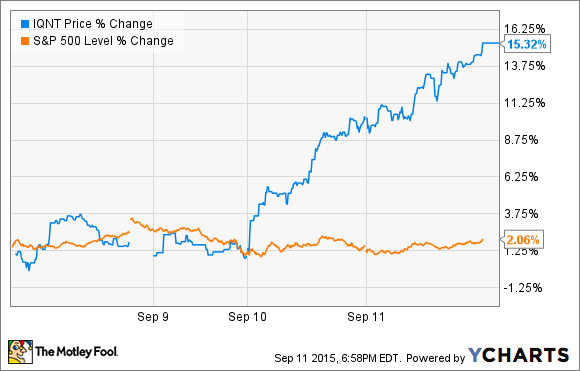 Inteliquent wasn't doing much until Thursday morning, when CFO Kurt Abkemeier took the stage at an industry conference arranged by Drexel Hamilton. That event wasn't exactly scintillating either, until the executive dropped a piece of information formerly unknown to investors.

Thanks to a recently announced contract with T-Mobile US (TMUS 0.99%), Abkemeier expects to record sales of "solidly in the $300 million range for next year."

The T-Mobile impact will be minimal in 2015, because it was announced so late in the year and will take some time to fully implement. That's why the payoff starts to arrive in 2016 instead.

Currently, Wall Street analysts expect Inteliquent to report sales of just $255 million next year, so this was a very material improvement -- and one that hasn't yet been included in the Street's financial models. That's one way to ignite a quick share price boost, and that's on top of the 30% surge the stock recorded when the T-Mobile deal was announced.

This stock has now soared 73% higher over the last 52 weeks, and still trades for a very reasonable 18 times trailing earnings. As it turns out, providing high-quality digital interconnections between different telephony networks can drive both strong profits and exciting sales growth. Who knew? 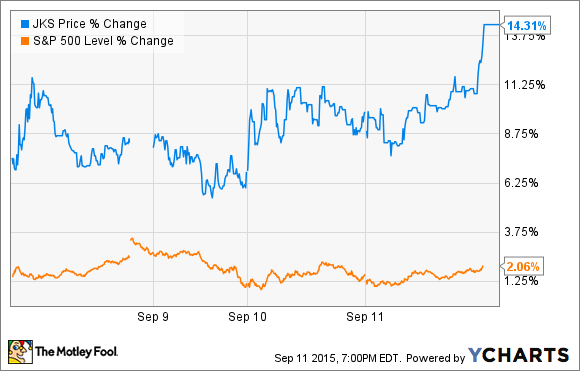 JinkoSolar started the week on a high note, coming in on a 6% tailwind as a major solar power rival reported disastrous results. Other solar stocks, including Jinko, rose on that news because this sinking ship is leaving more room for the surviving players in this rapidly evolving sector.

But things got even better on Friday, when Jinko added another 4% to its weekly haul. That boost came from a brand new financial arrangement, which will give Jinko a lot more room to maneuver over the next few years.

In a partnership with China's largest commercial bank, Jinko will have access to about $1.6 billion of fresh capital over the next three years. That cash infusion will just about double the company's debt balance, but will also allow Jinko to execute many projects it just can't afford on its own. The company will be able to scale up its solar module, panel, and materials production to the next level, and can also get started on large and capital-intensive installation projects that have so far been too expensive to even contemplate.

Jinko's shares have now gained 13% in 2015, just ahead of its largest China-based rivals. As always, the stock trades at bargain-basement prices, commanding share prices of just 8 times trailing earnings. Foolish solar market expert Travis Hoium says that this stock looks affordable after a recent plunge that had nothing to do with the solar power industry itself, and that Jinko's profitability makes it a de facto leader in the otherwise troubled Chinese solar market.

I can only agree, and add that the new financing only strengthens Jinko's long-term value. 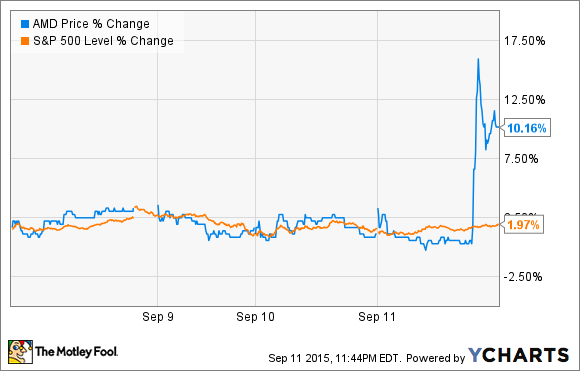 Finally, semiconductor designer AMD started this holiday-shortened week very quietly, humming along close to all-time lows as it so often has done this summer. Fellow Fool Ashraf Eassa wondered whether AMD shares looked cheap or doomed at these prices, and after reviewing a business model he knows inside and out, he landed on the side of "probably doomed."

But on Friday afternoon, AMD's mood changed abruptly. The stock spiked as much as 16% higher before settling down to a more modest 10% gain by closing time. That also added up to a 10.2% gain for the full week.

The catalyst behind AMD's sudden jump? According to the veteran chip sector watchers of the Fudzilla blog, AMD is in "serious talks" with a potential buyer. Not one of the many semiconductor peers who have fruitlessly been rumored to pick the company up over the years, but a new name. This time, AMD is reportedly talking to Microsoft (MSFT 1.29%).

With AMD under its belt, Microsoft would have full control over the main and graphics processor supply to its Xbox series of video game consoles, and also an in-house option to power future versions of its Surface tablets. It would also send the gaming console competition scrambling for new design options, since all three of the leading consoles today run on AMD silicon.

Now, even Fudzilla acknowledges that these talks may very well run dry before a deal is reached, and that a large semiconductor rival might be the more likely AMD buyer after all. But the mere rumor of a white knight on the horizon was enough to drive AMD's shares 10% higher in a single day.

This business is indeed in dire straits. CEO Lisa Su recently separated the graphics chip operations into a new reportable division, which led some observers to speculate that she might want to sell that segment separately.

Where the chips may land, nobody knows. But the time is ripe for big changes at AMD, and a wholesale buyout could certainly be an option. And even after this week's sudden pop, AMD shares have lost more than 50% of their value over the last 52 weeks. Get 'em while they're cheap, right?