Intel (NASDAQ:INTC) is well known for its best-in-class chip manufacturing technology as well as for its excellent processor designs, particularly for PC and data center applications. With each new manufacturing technology, as well as with its next-generation chip designs, the company delivers improved performance and power efficiency to customers.

It would seem that Intel has very big plans for the processors that it plans to build on its next-generation 7-nanometer technology node, which, in itself, could be quite a leap forward.

A new research lab to make much better processors

In a job listing found on Intel's website, the company says it's looking for a "CPU architect/researcher" for its recently formed Microarchitecture Research Lab in Bangalore, India.

However, that's not the interesting part.

According to the listing, the purpose of this lab is to "spearhead the research and advanced development of CPUs and GPUs in the 2020 and beyond timeframe."

The listing goes on to say that "by conceiving of and prototyping radical approaches, the Lab will aim to reposition the trajectory of today's CPU and GPU cores toward much greater power and area efficiency while still delivering industry-leading performance."

Given that the future of computing -- from low-power smartphones all the way to high-performance data centers -- seems to depend on chips becoming more efficient, it makes a lot of sense that Intel plans to invest significant resources into dramatically improving the efficiency of its chip designs.

A very interesting but vague tidbit
Digging further into the listing, Intel says that the "microarchitecture and design of these advanced cores will be aggressively co-optimized with Intel's futuristic 7nm technology node and its follow-ons deep into the next decade."

The above statement makes it clear that Intel intends to wring as much out of these new chips by making sure they take full advantage of the company's next-generation manufacturing technologies. It's also worth noting that Intel is referring to its 7-nanometer manufacturing node as "futuristic."

Although a job listing, in a bid to entice the most capable candidates to apply, is probably not immune to marketing hype, I think that this is a pretty clear sign that at the 7-nanometer node Intel plans to make a substantial and fundamental advance in its chip manufacturing technology.

Expect great things from Intel in the future
The typical design cycle for a processor is around four to five years, which means that the processors that we're seeing hit the market today began development many years ago. If we look at Intel's research and development spending, it's clear that the company has substantially ratcheted up its spending on the development of new products and technologies: 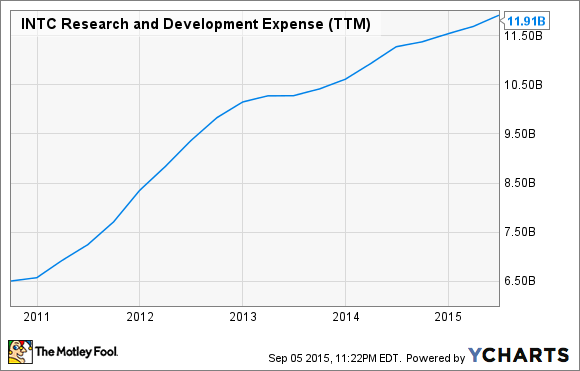 Only time will tell whether these investments will ultimately bear outsized returns for Intel and its stockholders, but as a shareholder with no plans to sell my Intel shares for the foreseeable future, I can't wait to see what Intel's massive research and development budget yields in the coming years.