Please ensure Javascript is enabled for purposes of website accessibility
Log In Help Join The Motley Fool
Free Article Join Over 1 Million Premium Members And Get More In-Depth Stock Guidance and Research
By Matthew DiLallo - Sep 12, 2015 at 10:47AM

Venezuela is working to bring non-OPEC Mexico on board for a possible output cut.

OPEC has made it clear: It will not cut oil production alone. However, it will consider a cut if other non-OPEC members join in. That, however, is easier said than done as other major non-OPEC producers simply can't shut off their oil pumps quite as easily as some in OPEC can.

Still, where there is a will, there is a way. And with the oil price stubbornly below $50 a barrel, countries both inside and outside of OPEC are more willing to be looking for that way. One country with a lot of will these days is Venezuela, which has really been pushing for OPEC to cut production and boost prices to rescue its faltering economy. It now also believes that it may have found a way, which is why it has sent a proposal to its OPEC peers for an emergency meeting.

Looking out for No. 1
This week, Reuters reported that OPEC and non-OPEC countries alike were studying a Venezuelan proposal for a summit of heads of state. It was a proposal that was confirmed by Qatar's Mohammed al-Sada, who is the alternative president for OPEC this year. He said, "The different countries are studying this proposal and if there was a response from OPEC and outside OPEC then OK." However, he still cautioned, "But we are in the study phase."

The key to any emergency meeting being called is that non-OPEC members must be willing to cooperate with cuts as OPEC won't risk losing its market share just to help weaker nations. That's tough to do as two of the largest non-OPEC producers are the U.S. and Russia. Given America's long history with OPEC, it won't be shutting off any oil pumps at the request of OPEC. Instead, any reduction in U.S. production will have to come naturally as oil wells deplete and that production isn't replaced for economic reasons.

Meanwhile, it's tough for Russia to turn off its wells even if it wanted to because of the different technology needed to get its oil out of Arctic regions. As Deputy Oil Minister Arkady Dvorkovich noted, "For Russia, given the structure of production, it's very difficult to cut supply artificially." However, he added, "If oil prices will be low enough for a long period of time, supply will go down in [a] natural way, and I think this [is the] most efficient stabilizer for the market." Furthermore, its oil producers, like those in the U.S. are beholden to shareholders and banks, not politicians. Those producers don't think all that highly of OPEC as the head of Russian oil giant Rosneft, for example, was recently very critical of OPEC blaming it for the oversupply for "failing[ing] to observe their own quotas " and that "If quotas had been observed, global oil markets would have been rebalanced by now." With Russia and the U.S. unlikely to join production cuts, it leaves OPEC with fewer options as it seeks willing partners.

Viva la Mexico!
Having said that, Mexico is beginning to emerge as a willing partner. This past week, Bloomberg reported that Mexico's labor secretary held talks with Iran's oil minister about joining a coalition to cut production. According to Iran's oil minister, Bijan Namdar Zanganeh, Mexico "expressed readiness to cooperate with OPEC should OPEC decide to enter market management."

Mexico has stepped up to the plate before as it joined an OPEC-led cut in 1998 that included 17 oil-producing nations including fellow non-members Norway and Russia. At the time, it reduced its output by 200,000 barrels per day, which played a key role in pushing oil prices off its low, as we can see on the following chart. 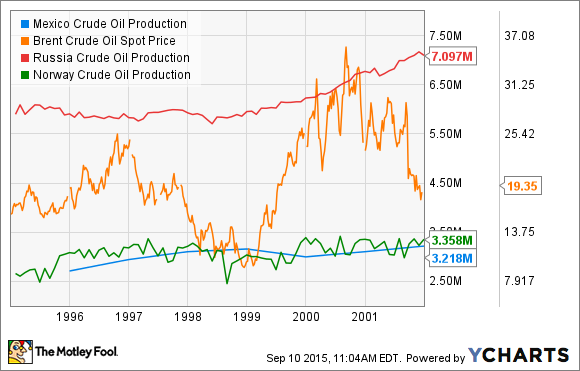 That being said, Venezuela and Iran, two of the biggest advocates of a special meeting, are going to need more than Mexico to not only pursued its fellow OPEC members to call a special meeting, but then agree to a output reduction.

Norway stated earlier this year that it has no plans to join OPEC this time around as it did in 1998 and again in 2002. That's partially due to the fact that its oil production these days is roughly 1 million barrels per day less than it was more than a decade ago due to declining production from its legacy North Sea oil fields. In other words, it simply lacks the capacity to make cuts.

Investor takeaway
Because of this, it seems like wishful thinking to believe that an emergency meeting of OPEC is on the horizon. OPEC might be studying a proposal, but without Russia and other larger non-OPEC producers at the table, it will be tough to engineer a coordinated cut as Mexico alone isn't enough to cause it to change course given that market share is the goal.