One of Wall Street’s biggest investment banks is growing bearish on oil prices.

This past week, venerable Wall Street investment management firm Goldman Sachs issued its latest oil price forecast. It noted that "[t]he oil market is even more oversupplied than we had expected and we now forecast this surplus to persist in 2016." Because of this, the price of oil could plunge to as low as $20 per barrel over the next year. While that's not necessarily what it expects to happen, it is bracing for more downside to oil prices.

Why it's so bearish
What it is concerned with is the fact that oil supplies aren't coming down fast enough to ease the glut, which has oil continuing to pile up in storage facilities. This past week, for example, oil inventories climbed more than 2.6 million barrels, which is more than double the expectation for an inventory build of 933,000 barrels. This was the second straight week inventories increased as supplies remained strong.

One of the reasons why supplies remain more robust than expected is because OPEC continues to flood the market with oil. As the chart below notes, it has dramatically increased its output since oil prices went south not only to hurt its rivals but to make up some of its lost revenue by volume instead of higher prices. 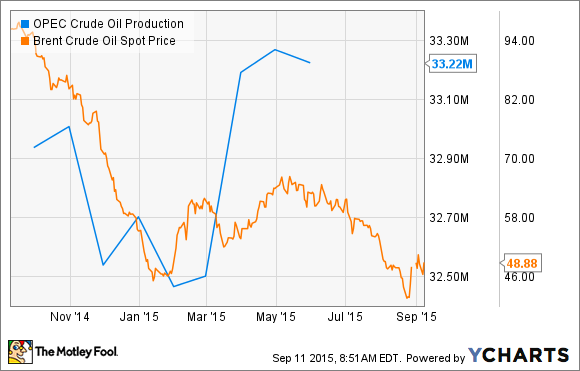 Having said that, oil supplies outside of OPEC are starting to decline, with more downside to supplies on the horizon. This is seen in the latest forecast from the International Energy Agency, which released its market report this week. It cut non-OPEC supply by half a million barrels per day next year, which would represent the biggest output decline in more than two decades. Meanwhile, it expects demand growth for oil to climb to a five-year high of 1.7 million barrels in 2015 before growing by another 1.4 million barrels next year. In other words, the oil market might be oversupplied now, but a correction could be looming.

The problem with oil price predictions
While the IEA is now forecasting large non-OPEC production declines next year, Goldman isn't yet convinced that will be enough to lead to higher oil prices. As it noted in its report, "The uncertainty on how and where that adjustment will take place has increased" and because of that increased uncertainty it is bearish on the price of oil. Its base case now calls for the oil price to average $45 through next year, with downside to as low as $20 per barrel.

That being said, it's very tough to predict where oil will go next. It infamously made the call in March 2008 that the price of oil was due for a "super-spike," saying that oil was "likely" to rise to between $150 and $200 per barrel within two years. However, over the next two years the price of oil did this: 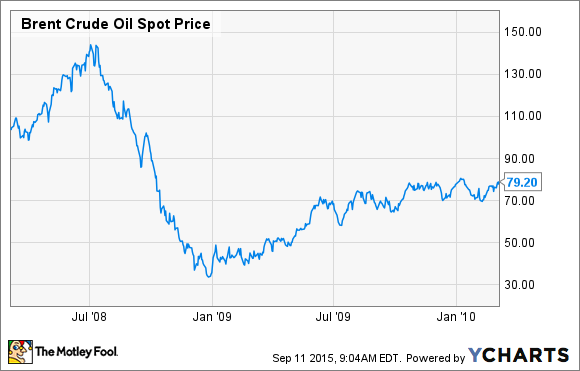 Now, it is worth noting that oil came close to the bottom end of the range. However, that could have very well been due to it becoming a self-fulfilling prophecy as speculators piled in to push the oil price higher. However, many traders likely got burned when oil quickly reversed course and bottomed out near $30 per barrel less than one year later.

It is possible that the price of oil could collapse to the $20-per-barrel range in another self-fulfilling prophecy. However, it's also possible that oil could meander in the $50 range for a few years or even quickly spike back near triple digits should OPEC shock the market and cut its output. There really is no telling what oil will do next.

Investor takeaway
The key for investors isn't to try to figure out where the price of oil is going next. That's really a fool's errand as no one has ever been able to predict the oil prices with much certainty -- just as no one in early 2014 was suggesting oil would be in the $40 barrel range a year later. Nobody.

Instead the key to successful investing is to buy great companies that are built to outlast any oil price. It is a very cyclical industry that can change on a dime. However, over the long term the strongest oil stocks have delivered outsized profits to their investors, which is a trend that is likely to continue when the next upcycle takes root.