Is this a buying opportunity or a sign of more trouble ahead? 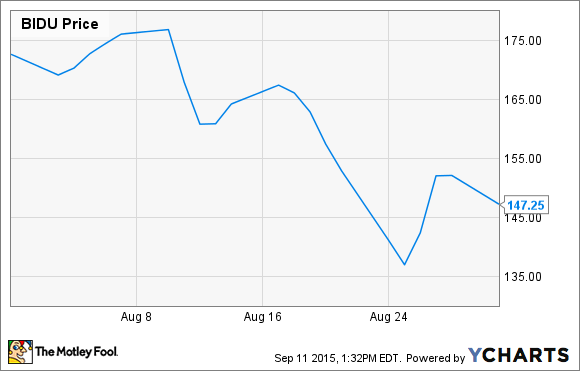 So what: Baidu's shares were hit hard in late July after the company issued a third-quarter revenue and earnings outlook that disappointed Wall Street. In addition, second-quarter earnings rose only 3% year over year even as revenue surged 38%, as escalating costs related to Baidu's online-to-offline initiatives ate into profits.

With China's economy slowing further since that time -- and its stock markets continuing to plummet -- concerns are growing that Baidu's impressive revenue growth may also come under pressure. Adding to those concerns are the recent actions taken by China's central bank to devalue the yuan, which can ding Baidu's financial results since the U.S. exchange-listed company reports its figures in U.S. dollars even though it earns its revenue primarily in yuan.

Together with analysts' trepidation regarding Baidu's heavy investments in its O2O efforts, these macroeconomic fears have resulted in a swath of Wall Street downgrades, which likely added to the decline in Baidu's stock price.

Now what: It's quite possible that Baidu's revenue and earnings may be subdued in the near term as China's economy struggles with slowing growth. And Baidu's stock could certainly fall further, particularly as volatility remains rampant in China's stock market. Fools, however, strive to maintain a long-term perspective, and in that regard, Baidu's prospects appear far brighter.

China's approximately 650 million Internet users outnumber the entire population of the United States more than twice over. Still, that means more than 700 million Chinese have yet to gain full access to the Internet. Combined with the growing purchasing power of Chinese consumers, this represents a multidecade growth opportunity for Baidu.

Yet after a more than 40% decline from its 52-week high, Baidu's market cap now sits at $50 billion. While that's a large sum, it pales in comparison to Google's $450 billion market capitalization. When factoring in Baidu's massive long-term market opportunity, that discrepancy seems far too large. So much so, that Baidu's stock may be too good a bargain for investors to pass up.