Please ensure Javascript is enabled for purposes of website accessibility
Log In Help Join The Motley Fool
Free Article Join Over 1 Million Premium Members And Get More In-Depth Stock Guidance and Research
By Matthew DiLallo - Sep 14, 2015 at 11:11AM

EOG Resources (EOG) is a different kind of oil company. It's not that the company is structured differently or is focused on a unique way of extracting oil. Instead, what sets it apart from its peers is that the company is built upon four core fundamentals, which CEO Bill Thomas hammered home on the company's most recent quarterly conference call.

1. EOG Resources is returns driven
In detailing what defines the company, Thomas said:

The first core fundamental is that EOG is return driven. We allocate capital in order to earn the highest returns. As we have done for many years, our goal is to be the peer leader in capital returns.

As Thomas notes, the company has led its peer group in returns for years, which is evident on the following slide.

In fact, because the company is driven by returns and not growth, it is one of the few oil companies that completely halted production growth when the oil price plunged. Prior to that the company had been delivering best-in-class production growth, but it chose to give up that distinction in order to focus on improving its returns in the low oil price environment. It's also worth noting that EOG Resources puts its money where its mouth is, so to speak, when it comes to returns as the company's employee compensation is firmly focused on returns over growth as we see in the slide below. 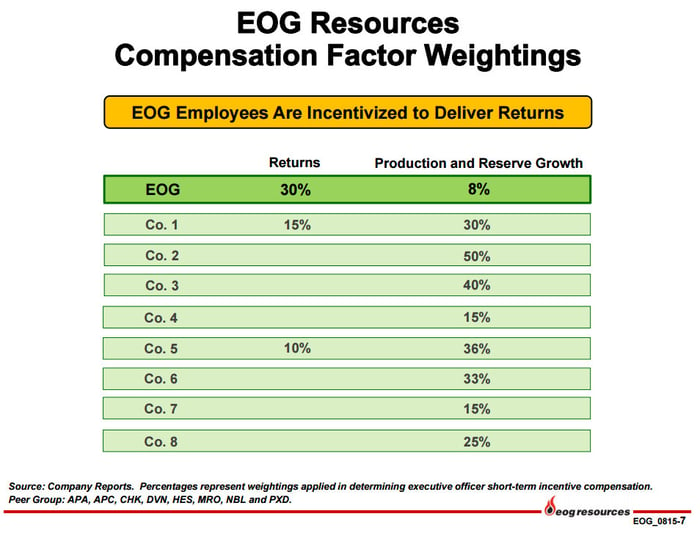 2. Its growth is organically fueled
Given its focus on returns over growth, it has found that organic growth is the best way to achieve high returns. Thomas noted:

Our second core fundamental is organic growth. Growing through the drill bit is the most return friendly, and therefore, shareholder friendly means of growth. Our goal is to be the leader in organic U.S. oil growth.

There is an allure within the market surrounding mergers and acquisitions. However, EGO Resources has found that acquired growth isn't as strong a driver of returns as organic growth. It's why the company hasn't made an acquisition in years. Instead, it has been an early leader in leasing acreage in promising areas so that it can grow production through the drill bit instead of paying up to acquire this growth.

3. Its balance sheet will remain strong
Thomas continued by saying:

The third core fundamental is a strong balance sheet. Our goal is to maintain a disciplined spending program that keeps our net debt low and liquidity strong.

By avoiding costly acquisitions and focusing on returns over pure growth, EOG Resources has been able to maintain a solid balance sheet with strong investment-rated credit. The focus on returns helped the company to avoid the temptation to overspend its cash flow when commodity prices were higher, which is something that has come back to bite many of its peers now that prices are lower. It's why the company maintains the second lowest leverage ratio in its peer group as is noted on the following side. 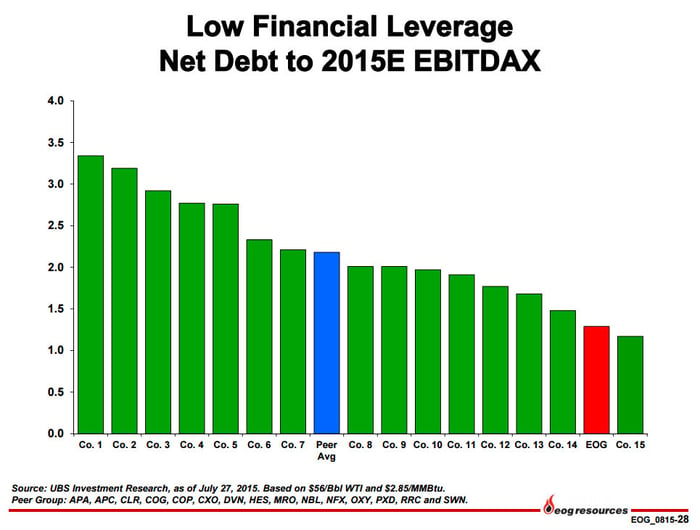 4. While not an income stock, the dividend is still a priority
Thomas finished up by saying:

With a dividend yield of less than 1%, EOG Resources isn't likely to be considered as a top income stock. However, that doesn't mean that the company's dividend should be dismissed. Instead of paying out a huge portion of its cash flow, EOG Resources keeps its dividend payout ratio low enough so that it can survive any commodity price cycle. The company has instead chosen to incrementally increase its dividend as it grows, which has resulted in a compound annual growth rate of 23% since 1999. This has enabled the company to avoid the fate of a lot of its peers, which have been slashing or suspending dividend payments during the downturn.

Investor takeaway
EOG Resources CEO Bill Thomas believes that by staying focused on these four core fundamentals the company will be able to deliver long-term value for shareholders. Further, these fundamentals enable the company to largely avoid the issues that have plagued its peers, which are struggling under the weight of debt during a downturn. Instead, by focusing on returns EOG Resources can continue to create value during the tough times and really thrive when conditions improve.