Please ensure Javascript is enabled for purposes of website accessibility
Log In Help Join The Motley Fool
Free Article Join Over 1 Million Premium Members And Get More In-Depth Stock Guidance and Research
By Matthew DiLallo - Sep 14, 2015 at 9:09AM

After unlocking the value of its Bakken midstream assets, Hess Corp. now has another asset that investors don’t seem to be recognizing.

Earlier this summer, Hess Corp. (HES 1.17%) announced the formation of a joint venture built around its midstream assets. The deal valued those business at $5.35 billion, which unlocked the value of the assets that investors really hadn't given much thought to. However, with a value now firmly placed on that asset, it brings to light another asset hidden within Hess Corp: its unparalleled balance sheet strength. It's an asset that could come in handy, should the price of oil remain lower for longer. 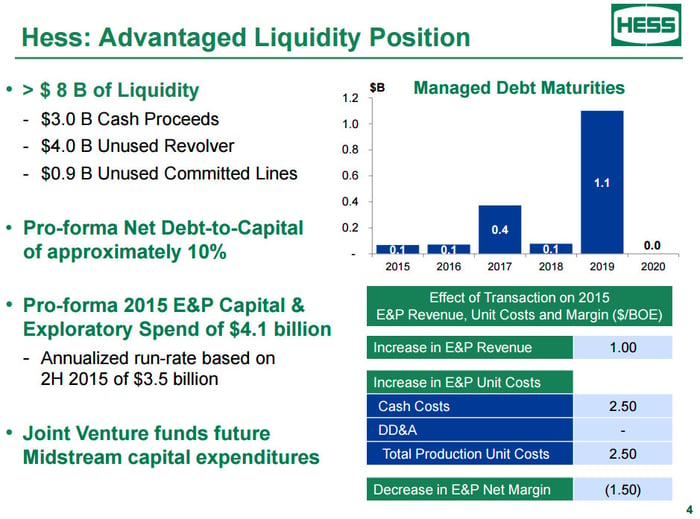 In fact, the company has a pro forma net debt-to-capital ratio that's a mere 10%, which is down from 22% before the receipt of the joint-venture transaction proceeds. To put that into perspective, it's well below its closest peers: 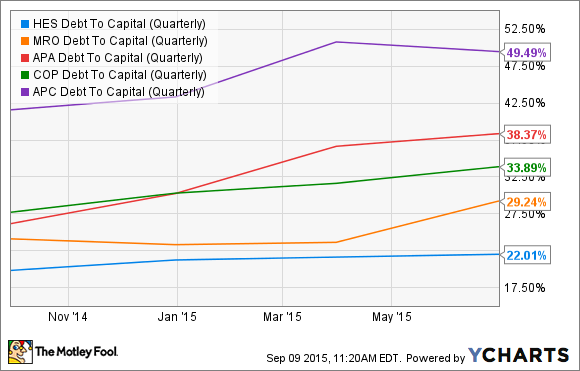 As the chart notes, Marathon Oil (MRO 2.55%) has one of the better balance sheets in the peer group, but its debt-to-cap ratio is much higher at 29%. Meanwhile, Apache (APA 0.64%) and others are comfortable with debt-to-cap ratios well north of 30%. This situation puts Hess in a much stronger position.

Not only does it have plenty of liquidity to fund its own capital spending plan, but it can also consider future growth opportunities that others might need to pass on. For example, it could become a partner of choice for offshore developments, as Hess has the money to fund these capital-intensive projects.

In addition, its balance sheet makes it quite a compelling acquisition target. For example, a larger rival could potentially seal a stock-for-stock merger with Hess and improve its own balance sheet, as Hess' lower leverage would pull down the pro forma leverage of the combined entity.

An $8 billion war chest
That said, Hess has an enormous amount of liquidity at its disposal, so it could go on the offensive to ward off any would-be suitors. With the cash from the joint venture proceeds as well as its credit lines, Hess has nearly $8 billion at its disposal. That's a whopping amount of liquidity for a company of its size. To put it into perspective, its current enterprise value is around $21 billion, meaning it has liquidity equal to 38% of its value. For comparison's sake, Marathon has $5.5 billion in liquidity, and it's a $17 billion company, putting its liquidity equal to 32% of its value, while Apache is a $25 billion company and it has $6.5 billion in liquidity, suggesting that Apache's liquidity is equal to 26% of its value.

With its low leverage and large liquidity position, Hess could easily swallow a highly levered peer without putting much of a dent in its balance sheet. It could use any combination of cash, cash and equity, or all equity to take advantage of the deep disconnect between high asset values and low corporate values to make a compelling offer to a rival oil company. Such a deal would bring additional low-cost growth opportunities into Hess' portfolio while lowering its costs through deal synergies.

Investor takeaway
With arguably one of the best balance sheets in the oil sector, Hess has unparalleled financial flexibility. It has the financial capacity to invest in capital-intensive offshore projects that others are passing on these days because of capital constraints. Meanwhile, with a balance sheet that's the envy of the sector, Hess might become an acquisition target of a larger oil company, as a merger would lower the leverage profile of the combined entity. On the other hand, Hess could seek to acquire weaker peers, as it has the financial wherewithal to take on more leverage.

Hess has plenty of options to create value for investors during the downturn.