The recent market turmoil has put both of these biotech blue chips in the discount pile. Which stock do our Motley Fool contributors think is the better buy today?

When the stock market catches a cold, biotech stocks as a whole tend to get the flu as investors dump their stocks en masse and flee to the sidelines for safety. Two biotech blue chips, Gilead Sciences (GILD 0.51%) and Biogen (BIIB 0.97%), have been hit quite hard over the past three months, with both of their stocks underperforming the S&P 500 during that time. 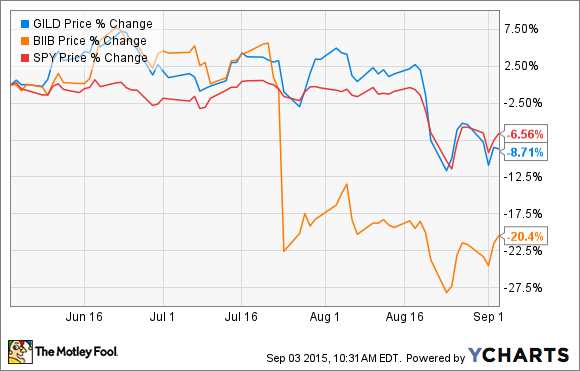 We Fools tend to go into buying mode when we see top-quality names trading at a discount, so we asked our team of Motley Fool contributors to let readers know which one of these two biotech giants they think is a better buy right now.

Brian Feroldi: While I'd be a happy buyer of either name right now, I'm more inclined to give Gilead the nod in this matchup, for a few reasons, but of most interest right now to long-term-oriented shareholders is its huge capital-return program.

While Gilead has been cranking out cash for years now, it really turned up its focus on returning cash to shareholders in 2015, as earlier in the year it announced a huge $15 billion share-repurchase program. Completing the buyback at current prices would reduce the number of outstanding shares by about 10%.

Not content to stop there, Gilead also wants to put cash directly into shareholders' pockets, as it recently initiated a small dividend that currently yields around 1.6%. Despite all of this focus on shareholders, Gilead currently trades at less than 9 times its 2016 earnings estimates, making it a great stock for investors who are looking for income, share repurchases, and value.

Todd Campbell: Gilead is without a doubt one of my favorite investments. In fact, I own shares in it and plan to for the long haul. But that doesn't mean I don't think Biogen can make investors money, too.

Biogen is the market-share leader in treating multiple sclerosis, or MS. Its top selling drugs, including Avonex, Tysabri, and Tecfidera, led Biogen to pull in $8 billion from its MS treatments last year. That's not shabby, given that the market for treating MS is valued at $16.8 billion.

Also, Biogen is diversifying its business into new markets that could reward investors with growth. Last year, Biogen launched two hemophilia drugs that require fewer monthly doses than prior-generation therapies, and as a result, sales of those two drugs totaled $128 million in the second quarter.

In addition, Biogen's pipeline includes mid- and late-stage drugs targeting lupus, Alzheimer's disease, and heart disease, all of which could eventually move the needle if trials are successful. Yes, Biogen faces a lot of competition, but with a proven track record, solid balance sheet, and some intriguing drugs in the works, I think owning it makes sense.

George Budwell: One of the main reasons Gilead outshines most other biotech stocks like Biogen, in my opinion, is its robust clinical pipeline, combined with its well-documented history of rapidly shepherding its most promising candidates through the clinical trial process.

The odd part, though, is that Gilead's highly diverse pipeline remains vastly underappreciated on the Street. Its stock trades at one of the lowest forward price-to-earnings ratios among all big biotechs and big pharmas. Put plainly, Gilead is currently not garnering any sort of premium for its clinical assets. And I believe that's one of the key reasons this stock remains a more compelling buy than most of its large-cap biotech peers.

For instance, Gilead is currently developing a potential functional cure for HIV in the TLR-7 agonist GS-9620, a monoclonal antibody, simtuzumab, and an ASK-1 inhibitor, GS-4997, for the massive untapped nonalcoholic steatohepatitis market, and a wide diversity of products for both solid tumors and hematological malignancies.

And these are just a handful of Gilead's experimental products with blockbuster potential. Gilead also sports a plethora of experimental cardiovascular and inflammatory disease treatments that tend to get little attention from analysts or investors.

All told, Gilead has one of the best clinical pipelines and managerial teams in the business. Taken together, this potent combination should keep the biotech's product portfolio chock-full of exciting new medicines for years to come.