Shares of Brazil's Ambev have been dragged down by the country's economic woes, presenting an opportunity for business-focused investors.

The market will be fixated on the Federal Reserve's two-day monetary policy this week, beginning on Wednesday; the first rate rise in nearly a decade is on the table -- the futures market puts the odds at one in four.

A story published yesterday by the Financial Times caught my eye this morning with an alluring headline: "Value investors call bottom to Brazilian plunge." According to the article, "multinationals such as British American Tobacco and Spanish conglomerate Albertis are among those taking advantage of depressed Brazilian asset prices to take locally listed subsidiaries private. Brazil's bourse has fallen 36% in dollar terms this year."

When shares of world-class businesses are dragged down indiscriminately with the rest of the market because of macroeconomic concerns, those are ideal circumstances for value investors to go shopping, whether they are multinationals, fund managers, or individual investors.

And make no mistake about it: Brazil is currently in the eye of the hurricane when it comes to macro worries, including the Petrobras financial scandal that reaches the highest levels of government, the worst recession since the Great Depression. S&P downgraded Brazil's sovereign credit rating last week to below-investment grade.

A quick screen of Brazilian companies that trade in the U.S. under American Depositary Receipts turned up one name that immediately stood out: Brewer Ambev SA (ADR).

The successor to two of the oldest breweries in Brazil, Ambev is present in 18 countries in the Americas and is the market leader in seven of them, including Brazil and Canada (Labatt).

Ambev is what I like to call a "Berkshire-worthy" business in that it has the characteristics Warren Buffett looks for when he invests in a company: Ambev boasts a stable, highly profitable franchise that is protected by a superlative portfolio of brands.

Despite these qualities, Ambev's ADRs have been hamstrung by Brazil's woes, opening up a wide gap in performance with its U.S. peers (represented in the following graph by the Dow Jones U.S. Food & Beverage Index): 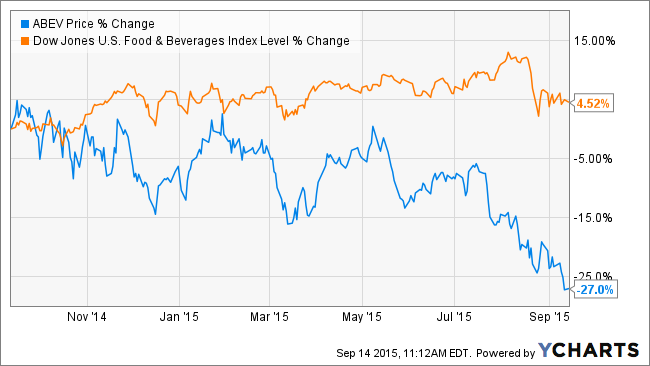 As a result, at 19.5 times the next 12 months' earnings-per-share estimate, Ambev's shares now trade at an 8% discount to the average for their Global Beverages peer group, according to data from Bloomberg. That compare favorably to an average premium of 7% over the past five years.

For many years, Stella Artois, one of Ambev's premium beer brands, was promoted in the U.K. under the slogan "Reassuringly Expensive." For investors with macro-related jitters, Ambev's shares now look reassuringly cheap.