Please ensure Javascript is enabled for purposes of website accessibility
Log In Help Join The Motley Fool
Free Article Join Over 1 Million Premium Members And Get More In-Depth Stock Guidance and Research
By Matthew DiLallo - Sep 14, 2015 at 10:10AM

The Tocqueville Gold Fund (TGLDX) offers leveraged upside to a rebound in the gold market.

After a really nice run for the better part of a decade, the price of gold stalled out and has continued to drift lower the past few years. 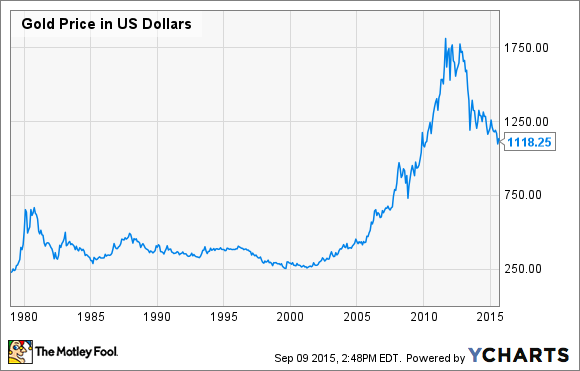 At some point its price will hit bottom and rebound. Whether that's due to a global economic panic, a rise of inflation, or some other factor, gold will rise again. Though there is certainly a possibility that gold continues to head lower and it could be years before it rebounds. Having said that, investors who are confident that a rebound might be around the corner have a lot of options when it comes investing in gold, including the Tocqueville Gold Fund (TGLDX).

What is the Tocqueville Gold Fund?
The Tocqueville Gold Fund is a mutual fund that seeks long-term capital appreciation by investing in gold or other precious metals as well as the companies that are engaged in mining or processing gold. The fund invests a minimum of 80% of its net assets, including any borrowings, in these assets, but no more than 20% of its assets will be invested directly in gold bullion or precious metals.

In other words, the Tocqueville Gold Fund offers investors leveraged upside to the gold market primarily via investments in gold mining companies. For example, while the fund's top holding at the moment is physical gold at 12.5% of net assets it owns a number of gold mining companies among its top 10 holdings. Most noticeably among its top holdings is Goldcorp (GG), which is one of the largest gold miners in the world. That's why it probably isn't a surprise to see it among the fund's five largest nongold-bullion holdings at 4.1% of net assets. Another notable holding in the top 10 is Silver Wheaton (WPM 5.42%), which is 2.9% of its net assets. What's worth noting about Silver Wheaton is the fact that it is not a gold miner; in fact, it doesn't mine any precious metals. Instead, it is a streaming company as it provides miners upfront cash to construct a new mine in exchange for the right to a certain amount of the mine's future production at a low fixed cost.

Why invest in the Tocqueville Gold Fund?
Because of this setup, the Tocqueville Gold Fund offers investors two important characteristics. First, it offers diversification as the fund not only holds physical gold but it owns the stock of several gold-related mining companies as well as other precious metal companies. This helps to mitigate some of the company-specific risk of owning just one gold stock to gain exposure to gold. A perfect example of this risk is Goldcorp as it has struggled in recent years with cost overruns on mining projects as well as from slumping gold prices. Those weak gold prices forced the company to write down billions of dollars in assets over the past few years with a $1.96 billion writedown of the value of the exploration potential of its Penasquito mine in Mexico in 2013 and more recently it took a $2.3 billion impairment charge for a mine in Argentina due to declining exploration and a change in the government's fiscal policies. As the following slide shows, Goldcorp has vastly underperformed the price of gold in recent years due to these missteps. 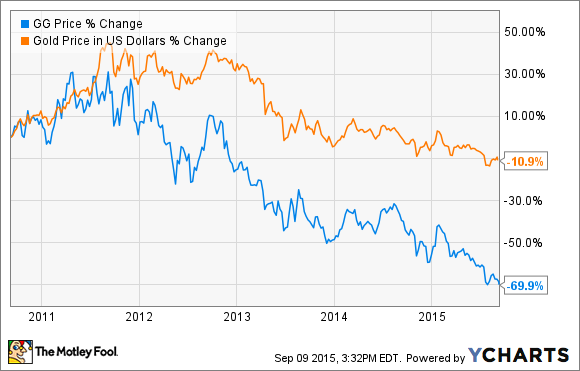 To avoid being right on the upside to the price of gold but wrong on the company, a diversified approach like Tocqueville or even a streaming company like Silver Wheaton can help investors avoid these missteps.

In addition to the diversification benefits, Tocqueville Gold Fund has the ability to employ some leverage to juice returns. While this leverage does cut both ways as it could really hurt returns should gold prices remain weak, it does juice the upside in a rebound. So, not only does it leverage the upside to owning gold miners that can grow production, and therefore value even if gold rises modestly, but it leverages that upside with its ability to borrow.

Investor takeaway
The Tocqueville Gold Fund certainly fits the bill for investors looking to invest in the potential upside in the gold market. Its diversification helps to mitigate some of the company-specific risks that can lead to underperformance, while its ability to borrow leverages its upside a bit. While it might not necessarily be the best way as there are cheaper ETF options, it certainly provides more upside than one gets from just owning gold bullion, with a bit less risk than an investor is exposed to by owning only one mining stock.