People are disappointed that the new iPhones start with just 16GB, but Apple already warned them that this would happen.

Apple (AAPL 0.11%) unveiled its latest and greatest iPhone 6s and 6s Plus models last week. The new 3D Touch was largely expected and seems like a promising selling feature that may spur the next wave of upgrades among loyal iPhone users. But something else seemingly caught consumers by surprise: the entry-level models still include just 16GB of storage. And people aren't all too pleased by the move.

Consider some of these reactions:

16 gb is NEVER enough for an iPhone

I really thought this would be the cycle where apple would stop making a 16 GB iPhone. Clearly I was wrong...

Or maybe some of these recent headlines from mainstream media outlets:

Here's the thing. You should never have expected Apple to boost the entry-level storage to 32GB. The iPhone 6s and 6s Plus were always destined to start at 16GB.

Apple already warned you this was coming
At WWDC in June, marketing chief Phil Schiller sat down with prominent Apple blogger John Gruber. The pair specifically discussed iPhone storage configurations, with Gruber arguing that 16GB simply isn't sufficient in this day and age, with apps becoming larger and the increasing size of photos and videos. That last part is particularly poignant considering the new iPhones shoot 4K video, which translates into massive file sizes. The size of iOS itself is also swelling, leaving less for user files.

When discussing the entry-level storage of 16GB, Schiller justified that continued level of storage by pointing to iCloud:

The belief is more and more as we use iCloud services for documents and our photos and videos and music that perhaps the most price-conscious customers are able to live in an environment where they don't need gobs of local storage because these services are lightening the load.

Schiller also said that by saving money on storage, Apple could invest in other areas like improving the camera.

Frankly, Schiller's justifications are dubious at best, but the point is that this conversation took place just three months ago. This is why consumers should have expected Apple to stick with 16GB in the entry-level model.

What it's really about
This isn't about maximizing margins on the entry-level model. The difference in cost for 16GB and 32GB is potentially less than $1, according to flash spot prices on DRAMeXchange. (Apple uses forward contracts and doesn't pay spot prices, though.) This is all about the upsell to the 64GB model, since quadrupling the storage for $100 is very compelling specifically because 16GB is insufficient.

Just look at how average selling prices, or ASPs, have benefited from both the new storage pricing structure combined with the 6 Plus release (which comes in at a $100 premium). 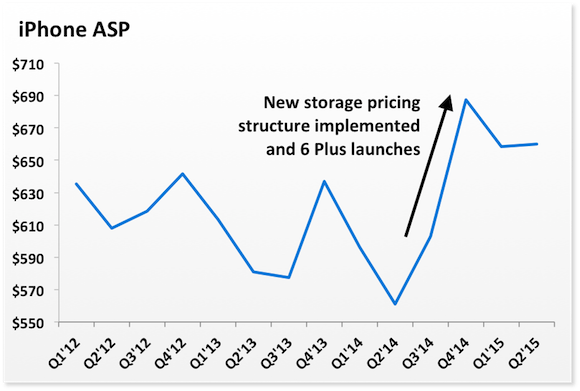 As a consumer, 16GB is frustrating because it really isn't sufficient for a modern smartphone. As an investor, 16GB is genius. Remember that Apple implemented this new storage pricing structure just last year, boosting the midrange model to 64GB and the high-end model to 128GB. Considering how successful the strategy has been, why would it change now?