Analog Devices is the supplier behind Apple's new Force/3D Touch. The Street looks pretty bullish on the chipmaker. 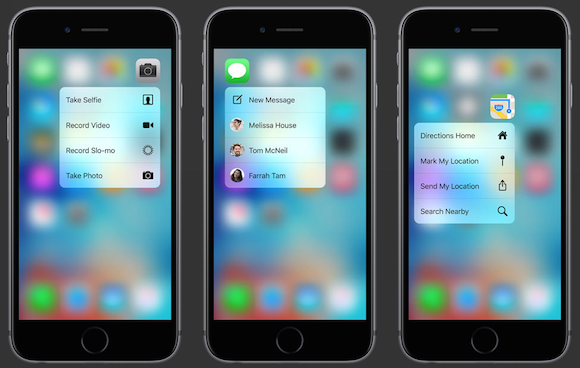 3D Touch is the headline selling feature in the iPhone 6s and 6s Plus. Image source: Apple.

As expected, the headline selling feature in Apple's (AAPL -2.01%) new iPhone 6s and 6s Plus models will be 3D Touch, the rebranded technology that integrates pressure sensitivity into the display to unlock a whole new slew of interface interactions. Seeing as how investing in Apple component suppliers is a popular investing trend these days, investors can't help wondering if Analog Devices (ADI -1.11%) is worth looking at, since the smaller analog-chip maker is reportedly the exclusive supplier of the microcontroller that drives the 3D Touch display.

Is Analog Devices a buy?
The Street has been busy tackling this very question. Last month before earnings, BlueFin Research Partners estimated that overall Force/3D Touch revenues could add up to an additional $500 million in fiscal 2016. The firm notes that Analog Devices has had some trouble finding customers willing to pay for its superior performance, but Apple fits the bill quite nicely.

Seeing as how the iPhone 6s and 6s Plus production ramp likely started a few months ago, it was no surprise when Analog then reported record revenues of $863 million in its fiscal third quarter. It was also pretty obvious where the strength was coming from as well.

In no uncertain terms, the consumer segment stole the show. Naturally, Analog Devices has to speak vaguely when referring to Apple on the conference all, but it's pretty clear who it is. Here's CFO David Zinsner:

Well, precision technology, we're attempting to leverage that across all of our end markets and all of our customers. The specific product that is driving some of the demand for next quarter is specific to one customer, and in a lot cases, we work with those customers to customize the technology for their needs. And obviously as we do that, we don't give that to another customer to be able to utilize.

Not only were the quarter's results better than expected, but Analog Devices also issued upbeat guidance. In the coming quarter, revenue is expected in the range of $880 million to $940 million, which utterly crushed the consensus forecast of $876 million.

There's more where that came from
Following the strong results, SunTrust Robinson Humphrey boosted its rating on Analog Devices to "buy" while increasing its price target from $68 to $71. The firm believes that Apple Force/3D Touch will proliferate throughout Apple's lineup in the coming quarters, and Analog Devices will be a key beneficiary as the incremental revenue adds up.

This is an entirely reasonable conjecture, since Apple tends to introduce innovative new technologies in one major product before bringing it to the rest of the product portfolio. Usually, Apple does this with the iPhone first, but this time around it introduced Force Touch first in Apple Watch and the new MacBooks before the iPhone (Analog Devices supplies the chips in both of these devices). That being said, I fully expect the iPad to get 3D Touch next, although it'll take more time to implement the technology on such large displays.

It seems that the Street is mostly bullish on Analog Devices as Apple ramps up Force/3D Touch. Even though Apple is contributing heavily to the near-term upside, it's also good that Analog Devices has a very large and diversified customer base. We've all seen what can happen if suppliers rely too heavily on Apple.

Evan Niu, CFA owns shares of Apple. The Motley Fool owns and recommends Apple. We Fools may not all hold the same opinions, but we all believe that considering a diverse range of insights makes us better investors. The Motley Fool has a disclosure policy.