Please ensure Javascript is enabled for purposes of website accessibility
Log In Help Join The Motley Fool
Free Article Join Over 1 Million Premium Members And Get More In-Depth Stock Guidance and Research
By Bob Ciura - Sep 15, 2015 at 7:42AM

Kohl's stock is down 36% from its 52-week high, but it's looking like an under-the-radar dividend opportunity.

The retail sector has gotten hit hard along with the broader market over the past several weeks. Investors are selling anything and everything, even some high-quality retailers that are still highly profitable. One such retailer is Kohl's Corp. (KSS -19.64%), which is currently down roughly 36% from its 52-week high.

But the company's fundamentals have held up well this year. Kohl's has had its share of problems, but the company has remained highly profitable. And the stock pays a strong 3.6% dividend, which is an attractive yield for income investors.

For these reasons, Kohl's might be a great buying opportunity for dividend investors.

Kohl's gets whacked
Kohl's reported quarterly earnings on Aug. 13, and the stock fell 10% that day. In fact, Kohl's stock has fallen by double digits on a percentage basis the last two times the company has reported earnings. Two quarters ago, Kohl's attributed its disappointing earnings report to the poor weather in the first quarter. Last quarter, the problem was a shift in the tax holiday associated with the back-to-school season.

In the U.S., states allow a three-day sales-tax holiday on back-to-school shopping. Usually, the holiday occurs in July. But this year, the holiday was pushed into August. This shift created a difficult comparison period for Kohl's, as the holiday boosted last year's comparable-quarter sales. The core customer demographic at Kohl's is primarily low- to middle-income shoppers who rely on this tax holiday as part of back-to-school shopping. Without it, last quarter's results were weaker than expected.

But for long-term investors, these short-term headwinds aren't a major concern. Going forward, the company won't have to deal with these issues, and if anything, they'll provide for easy comparisons in future quarters. In the meantime, focusing on what Kohl's continues to do well paints a much better picture.

Kohl's remains popular with shoppers
Kohl's total revenue is up 0.9% over the first half of the year, and its comparable-store sales, which measures growth at stores open at least one year, rose 0.1% last quarter. Admittedly, those aren't huge numbers, but the company is still growing. In fact, last quarter represented the first time since 2011 that Kohl's achieved three consecutive quarters of positive comparable sales. That is hardly cause for such alarm on the part of Kohl's investors.

Kohl's continues to enjoy strong brand loyalty. In the off-price retail space, resonating with consumers is hugely important to keep customers from switching to a competitor. In this regard, the company's rewards program is working well. Its mobile app was downloaded more than 2 million times this year alone. Kohl's also maintains a very popular customer loyalty program. The "Yes2You" program continues to grow, with 32 million members. Over half of transactions are now with loyalty members.

Ring up a great dividend
Kohl's started paying a dividend in 2011 and since then has increased its payout by 15% compounded annually. Kohl's is strongly profitable, growing modestly, and in good financial condition. The company has almost $1 billion in cash on the balance sheet, a modest 49% long-term debt-to-equity ratio, and no debt maturing until 2021.

This situation allows the company to reward shareholders with rising cash dividends year after year. At a 3.6% yield, the dividend hasn't been this high in five years. Moreover, Kohl's stock looks like a bargain. Shares exchange hands for 13 times earnings, the cheapest this stock has been in three years. 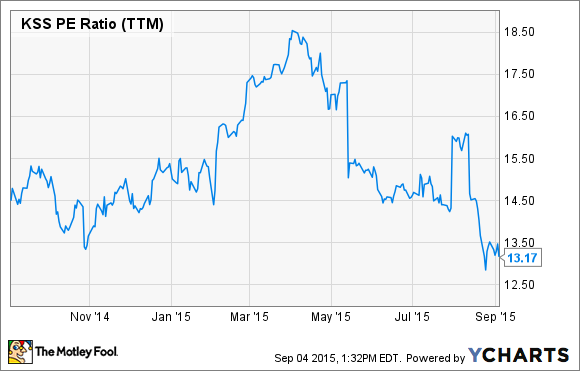 Kohl's doesn't get a lot of attention from analysts or in the financial media. But for Foolish investors interested in a cheap stock with an attractive dividend yield, Kohl's is on sale.